I’ve been waiting to post on Katrina not because I don’t have anything to say, but more because I’m not sure I can express myself without a) offending people with certain political affiliations; and b) I’m not sure if my prose is strong enough to express exactly how I feel about the whole disaster. So, instead of writing a scathing diatribe on the incompetence of the administration and the devastation that was allowed to increase exponentially, I will link to several pages I found interesting and withhold my written attack for a later date.

Anne Rice, a native of New Orleans, has written an eloquent article describing what it means to be a resident in the city she so loves. Here’s an excerpt:

“But to my country I want to say this: During this crisis you failed us. You looked down on us; you dismissed our victims; you dismissed us. You want our Jazz Fest, you want our Mardi Gras, you want our cooking and our music. Then when you saw us in real trouble, when you saw a tiny minority preying on the weak among us, you called us “Sin City,” and turned your backs. Well, we are a lot more than all that. And though we may seem the most exotic, the most atmospheric and, at times, the most downtrodden part of this land, we are still part of it. We are Americans. We are you.”

The blatant and arrogant nepotism of this administration makes me sick.

Apparently, the shelters here in San Antonio have prepared accommodations the refugees find quite nice.

Go here for comparative satellite images of New Orleans before and after Katrina. Google Maps also has enabled a “Katrina” function on Google Maps where you can see the devastation. Usual Google Maps interface operates the map.

For those who claim race played no part in the abysmal rescue efforts I invite you to have a listen to Barbara Bush’s comments on the refugees, and then to make your own Marie Antoinette references. Just imagine if a class 5 hurricane hit Martha’s Vineyard. Do you think the government would let the 14,000+ WASP residents linger there for several days with no food or water, and deny them the ability to leave on their own power? Stab yourself in the eye with a pencil if you believe they would. I may not believe communism is the way to go, but Karl Marx and Friedrich Engels sure are helpful in providing answers at a time like this.

Normally I find the news media outlets to be an embarrassment to journalism, but during the Katrina disaster I found myself admiring some very unlikely commentators. Watch as Sean Hannity, Alan Colmes, Shepherd Smith, and Geraldo Rivera abandon all the talking points they usually read off the teleprompter and simply broadcast the news. Then, watch as Anderson Cooper tries his best to keep his cool when confronted with typical political self-congratulation.

Now, go here to watch as meteorologist Chad Meyers loses his cool. After you’ve finished laughing at that on-air breakdown, go here to listen in amazement as Wolf Blitzer makes a comment so insane and filled with bigotry, it will leave you wondering why he still has a job, or at the very least hasn’t been violently ambushed by Al Roker. 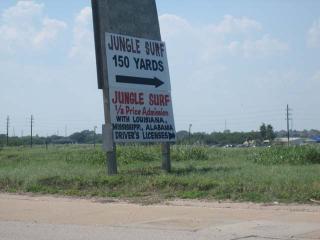 Driving through Galveston this weekend my wife and I saw this sign. Let’s think about this for a moment. Jungle Surf, which is a water park, is offering the survivors of a MASSIVE FLOOD 1/2 price admission to enjoy a day frolicking in pools and sliding around on wet, slippery surfaces. If I’d just come from New Orleans that sign would probably drive me to commit a homicide.

Go here to view an archive of the front pages of 477 newspapers from around the world for August, 30. The page only displays 48 newspapers at a time, so you’ll have to use the “view more pages” function. You can also view the newspapers by name, which makes it easier to find the front page of your hometown newspaper.

Finally, I’d like to close with a quote from tonight’s Daily Show: “Hurricane Katrina will be President Bush’s “Monica Lewinsky.” The only difference being that tens of thousands of people weren’t stranded in Monica Lewinsky’s vagina.” Click here to see the video of that. Well, of Jon saying that…not the vagina thing.