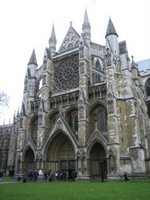 Today Leigh and I visited Westminster Abbey. King Edward the Confessor built the original church around 1050 as a form of penance to the Pope for failing to go on a pilgrimage. Since the coronations in 1066 of both King Harold and William the Conqueror all English monarchs have been crowned at Westminster Abbey. You can read more of the history at the abbey’s official site.

I think before the visit I was most excited about seeing the tomb of Geoffrey Chaucer. His tomb resides in Poet’s Corner of the Abbey along with many other famous British artists, but Chaucer was the first artist to be buried in the Abbey. While standing in the crowd of people visiting his tomb, the sudden urge to begin reciting the General Prologue in traditional Middle English felt overwhelming. Don’t worry, I fought it. I settled for mumbling it under my breath and I made it through three or four times before Leigh got annoyed enough to stomp on my foot. I just couldn’t help it”¦Whan that Aprill, with his shoures soote / The droghte of March hath perced to the roote”¦ 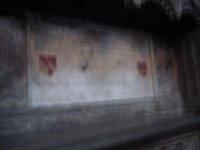 We also tried to take a photo of Chaucer’s tomb and the shrines to Shakespeare and Milton, but those pesky Abbey guards were everywhere and the flash on the camera just did not want to cooperate with me. I turned it off, palmed the camera, casually walked up to the tomb, had Leigh act as a blocker, raised my hand and hit the shutter button, and the damn flash went off…in a large group of people who all turned to stare at me. I tried it two more times, each time turning the flash off, and each time the damn thing lit up like a stobe anyway. The last time it worked properly, but the photo looked terrible.

By the time we left the Abbey it had begun to rain and the wind had picked up. We had packed an umbrella but the wind blew so strong it turned it inside out several times despite my holding onto the thin umbrella skeleton. We made our way to the Tate Museum where we browsed through the exhibition “Gothic Nightmares: Fuseli, Blake, and the Imagination.” We saw some fantastic art, including some amazing works depicting scenes from “Paradise Lost,” Shakespearean plays, the Book of Revelation, and classical mythology. 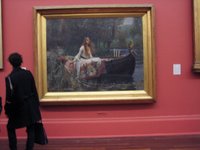 After spending several hours among the most sublime paintings I’ve ever seen we quickly visited the rested of the museum. And serendipitously I came across Waterhouse’s painting “The Lady of Shalott.” It brought tears to my eyes. Seriously. Leigh will vouch. Amazingly, the photo I craftily took of this came out very well (the stupid Tate also had a rule against photo-taking, but I didn’t get the photo of Chaucer and I was dammed if I was leaving the Tate without the Lady.) 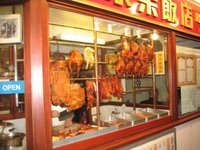 We spent the rest of the evening roaming Leicester Square and buying Ricky Gervais DVDs and Eddie Izzard CDs. Hey, you buy the souvenirs you like and I’ll do the same, okay? We ate dinner in London’s Chinatown. I had the roasted duck and mm-mmm was it good. I named my yummy roasted duck “Quacky.” Leigh thought it a tad macabre of me to name my meal, but hey, I prefer to think of it as sentimental. And I’m nothing if not a sentimental kinda-guy.

Here are a few helpful tips we learned today in case you visit the UK anytime soon: 1) Restaurant service sucks. The food’s good but they don’t give a damn if you eat there or not. Oh, and glasses are shot-glass size. Conserve your drink ”˜cause you ain’t getting another one. 2) People in art galleries are rude as hell. Don’t say excuse me because they won’t when they bump into you. Just shoulder into them the best you can. 2) Modern art is stupid. ”˜Nuff said. 3) Most bathrooms you have to pay to use and the ones you don’t are hidden in underground mineshafts.

Tomorrow we’re visiting the National Gallery and the British Museum. Be sure to check out my photostream on the side-bar. I’ve added quite a few pictures, and the ones on this page only represent the three newest ones, so click on Hypermark’s photostream to view them all. Or just follow this link. Either way…up to you.