Ugh. I’m sorry, but you’ll have to settle for a relatively small post. We’ve walked all over London today and I’m just not in the mood to type. 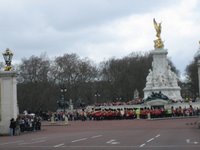 I just didn’t find it all that interesting, but truthfully I never find any military marching all that engaging. I guess after you see John Winger lead a bunch of dog-faces to victory through superior Arrrrrmmmy training in front of General Barnicke then everything else pales in comparison”¦even the changing of the guard at Buckingham Palace.

We spent a while strolling around St. James Park, taking pictures of the ducks and the pretty flowers. Then we took the tube over to the British Museum. Man that place is big. I’m serious”¦you could get lost in that place. We’re going back tomorrow, so more on that later. 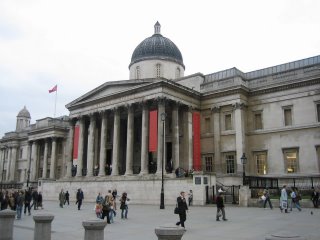 We also visited the National Gallery. Leigh knows a great deal more than I do about paintings so she enjoyed it more than I did, but it was still a wonderful experience. Although to be perfectly honest, after a day full of looking at priceless works of art I wanted nothing more than to read a comic book. And not even an intellectually stimulating book either. Anything with muscle-bound guys beating up ridiculous villains would have sufficed.

Later in the evening we visited the Tate Gallery again, as we had missed a bit of it the day prior. While we were there Leigh bought me a framed canvas print of “The Lady of Shalott.” If you read my previous post you know how much that means to me.

Altogether it was a pretty good day. I posted some more photos on flickr so check’em out. You’ll have a link dump tomorrow.

6 thoughts on “London: Museums, Galleries, and the Facts Jack”