You Know What Really Grinds My Gears?

Oh good. Another prison abuse scandal. That’s just what we need to boost morale and improve our waning confidence in the government.

An article released by the Washington Post today claims the CIA has several prisons dubbed “black sites” where they are holding the higher ranking al Qaeda operatives indefinitely. Up until now neither the CIA nor the administration has ever acknowledged the existence of the prisons, but it appears that the prisoner abuses here may make the ones at Guantanamo and Abu Gharib look quaint by comparison. The article doesn’t come right out and boldly claim that torture was a regular occurrence in these “black sites,” but it does state that:

“But the revelations of widespread prisoner abuse in Afghanistan and Iraq by the U.S. military — which operates under published rules and transparent oversight of Congress — have increased concern among lawmakers, foreign governments and human rights groups about the opaque CIA system. Those concerns escalated last month, when Vice President Cheney and CIA Director Porter J. Goss asked Congress to exempt CIA employees from legislation already endorsed by 90 senators that would bar cruel and degrading treatment of any prisoner in U.S. custody”

That last bit about exempting CIA employees from legislation makes my skin crawl just a little.

It makes me sad how so many people are able to rationalize the torture at Abu Gharib and Guantanamo, and I have no doubt that if there have been cases of torture at these new sites the same folks will brush them off as well. Most frequently heard excuse: “Well, they’d do worse to us.” Undoubtedly they would, but then that’s the reason we’re fighting them, right? I have a relative who referred to statements made by Al Gonzalez regarding the Geneva Convention as quaint, as being a “conspiracy theory” even thought it appeared in Newsweek. We’re just not paying attention to what’s going on.

We’ve been told over and over that they’re zealots without conscious that’ll do anything to anyone to achieve their goals”¦can you tell me how we’re different from them again? What happens when the public finally begins to realize the U.S. has been acting like the very beast we’ve set out to destroy? When all the dust settles, and the bodies are counted, and the victors raise their arms to the heavens in righteous celebration, will our means during this war justify that victorious end? I have my doubts.

I hate to quote Neichize because it’s just so clichÃ©, but: “He who fights with monsters should be careful lest he thereby become a monster. And if thou gaze long into an abyss, the abyss will also gaze into thee.”

Since the United States seems to think that it’s some kind of moral exemplum for the rest of the world it cannot go around acting like a damn mercenary, because doing so simple reveals the rot inherent in our rhetoric. The world knows we’re full of shit when we denounce the atrocities of Saddam but then regularly torture detainees. Either we’re a moral exemplum or we’re not. We should either wage the war the way we see most fit morals be damned, or we should strive to become that moral ideal we advertise. 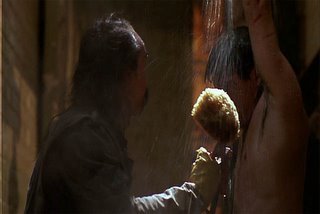 Just an afterthought: I’m not necessarily against torture because of some moralistic hang-up. If you think that hiring Endo to bring in the car battery will get you the vital information you need, then start the shower and uncover the prisoner’s genitals my sadistic friend. But in our case the torture is counter-productive. Studies have shown time and again that information can be attained far more reliably with more persuasive methods. As clichÃ© as it sounds, the only thing we’re doing is creating more terrorists, because if they weren’t terrorists when they went into one of the detention units then they certainly will be after they see a cell-mate beat with nightsticks or witness the Koran flushed down a potty. And the first chance they get they’ll tell their story to other guys and the cycle will simply perpetuate itself.

One thought on “You Know What Really Grinds My Gears?”