I’m usually not a big fan of re-mixing classic rock songs with current rap tunes, but I gotta say, the new 50 Cent / Queen mash-up, titled “Q-Unit” has been growing on me. By no means do I find the new re-mixes superior to the original Queen songs. I’m not sure we’ve seen a better rock vocalist than Freddie Mercury, and maybe that’s why these mix-ups work so well, as they really don’t use Mercury’s vocals very much.

“Under Pressure All The Time” practically sounds like it was written for Fiddy, and at least this time the rap song acknowledges the fact that it’s lifting the beat from Queen, unlike some other “rapper” I could mention. (Warning for Old People: There are quite a few swear words and references to drug use in the songs.)

I love the Photoshopped Fiddy that appears on the web page”¦that Freddie Mercury pornstar-stach looks amazing on him. I did a little Photoshopping of my own and this is what I came up with-I call it “50 Mercury”: 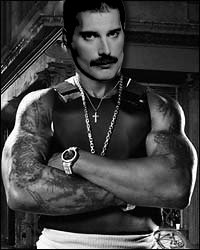 Man, I got mad Photoshoppin’ skillz! Word to your mother.

(And yes, I do realize that I used that exact same Fifty Cent body two posts ago. I’m lazy and I don’t care, so thppppppth!)