I only have time for a quick post because we’re packing up and preparing (why are you preparing; you’re always preparing, just go!) to leave by train to Florence. 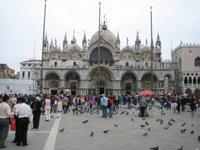 We visited St. Mark’s basilica yesterday amidst a million other annoying tourists. The beauty of the place overwhelms you from the moment you walk through the doors. 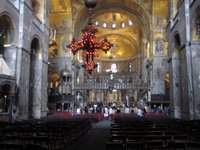 A hanging cross comprised of hundreds of flickering candles greets you as you walk through the door, and then you look up and see the domed ceiling completely covered with tiled mosaics. Yeah, those mosaics aren’t painted; they’re made up of colored tiles that are no bigger than your thumbnail.

As you make your way further towards the back of the basilica and closer to the altar, you see wooden carvings of the crucified Christ surrounded by the saints. 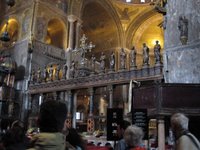 But no matter how beautiful an object on the ground my attention kept returning to the mosaics on the ceiling. The pictures don’t really do them justice at all. They are mesmerizing, and as much as they entranced me, a cynical 20th century American empiricist, I can only imagine the reverence that must have filled ancient parishioners as they walked through the doors after a long pilgrimage to see St. Mark’s and the mosaics greeted them with their flickering, somber light.

The visit wasn’t all peaches and cream. They had a no-photo rule in the place, and that really, really annoyed me. Here’s why it annoyed me:

First off, I would never, ever, take pictures in a place of worship where people were actually worshiping. We went into a church like that the first day in Venice. A gentleman was receiving confession from a priest, people were praying, and the camera stayed in the pocket. No question. But”¦when you have lines of tourist snaking through your church like a freaking amusement park, and you’ve installed not one but two, big gift shops in the middle of the place, don’t tell me that taking pictures would compromise the solemnity of the of the church. You did that when you started heat-transferring pictures of it onto T-shirts.

Anyway, I took lots and lots of pictures, sometimes right behind the back of the guard who had just told me to put my camera up and had ran off to tell another tourist to do the same. I’m not lying when I say that as soon as a guard would turn his back fifty flashes would immediately go off. People just didn’t care. Like I was gonna pay 20 euro for a glossy book at the gift shop when I could make my own.

Okay, so I’m going to Hell. I came to terms with that a loooong time ago.

We gotta get through packing. I’ll try to sum up the Venice leg of our trip tonight. See you in Florence.

One thought on “Venice: Illicit Phototog”