I’m writing this on Sunday in hopes that we’ll find an internet hotspot during the day from which to post. 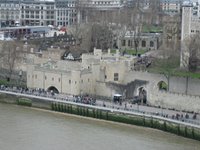 Friday was our last day to spend in London. We spent the morning touring the Tower of London. Leigh and I both really enjoyed it, in spite of the rainy weather and the huge crowd of people and the limited amount of time we spent there.

A yeoman, or as they’re colloquially known “Beefeater,” led us on a guided tour, during which he related all the gristly details of the many executions that occurred at the tower.

Anne Boleyn, William Wallace, and many others met their fate at the hand of a leather-clad executioner in the walls of the tower. The crowds, screaming kids, and ubiquitous gift shops kinda seemed to mock the dark history of the tower. That was the one place we visited where I really wished we had been the only visitors.

We took a lot of photos at the tower, but I’m not sure how entertaining you’d find them. They’re mostly comprised of semi-blurry display cases containing weaponry and devices of torture from hundreds of years ago. 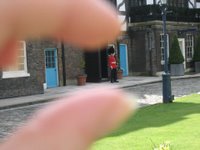 The crowds were so dense inside the White Castle (not the burger joint) that I had a hard time lining up any shots, and the shots I did get were compromised by the low light. I did take this shot of one of the Queen’s guards. Isn’t he cute? He’s a Lilliputian who operates as a special agent for the governor.

So we found ourselves wandering around St. Mark’s square at midnight, dragging our heavy-ass luggage, looking for our apartment. And I say “our apartment” here because right now we’re in the apartment, but at the time we were unsure if we actually had a place to stay. We rented an apartment months earlier from an individual Leigh had serendipitously contacted on the internet, so we hoped and prayed we weren’t the victims of a scam of some sort. Just imagine the anxiety of roaming a dark city through claustrophobic alleyways, pulling your luggage, unable to communicate with the few people you pass, and not knowing if you in fact have a place to sleep when, and if, you finally find the place you’re staying. 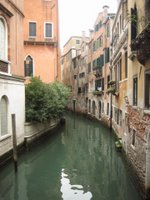 We found it, and I’m convinced this apartment will turn out to be the best place we’ll stay on our trip. It’s a fully furnished apartment and we paid less for it than for any of our hotel rooms. It’s fantastico.

Anyway, Venice is a wonderful city. It’s so amazing here that I find myself imagining a Hollywood set designer built it, because it’s hard to believe something so perfect and idyllic just naturally evolved. We’ve found our Arcadia, and I hate that we only have three days to spend in it. Venice is like a leisurely stroll around a sweet-smelling pond, as opposed to the wind-sprints on a sun-scorched running track that is London. 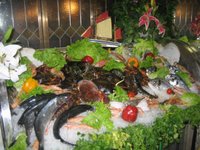 We had the most amazing dinner imaginable last night. Venetian food is known for its fresh seafood and the simplicity of the dishes. Many of the restaurants showcase the fresh fish they cook with by displaying it outside in an ice-bed, like you see in the picture. You can’t tell it from the photo above, but those lobsters were still moving.

At dinner we placed our trust in the hands of our capable, and thankfully English-speaking, waiter and allowed him to choose our dishes, with the only stipulation that we wanted to eat like Venetians. He told us that Venetians eat fish and we said that was fine. He brought us an appetizer of fresh fish marinated in EVOO (as Rachel Ray would say), our antipasti was balls of dough in the tangiest marinara I’ve ever tasted, and our main dish was grilled prawns and mixed fried fish. We had a bottle of Pinot Bianco, and we finished the meal with Tiramisu and cappuccino. Yum-O. On the way home I bought gelato. I just couldn’t help myself. 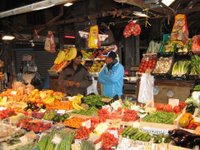 It seems like down every alley way we discover another market where we find the most amazing candy and the most aromatic produce. I love it, and I’m a sucker for samples. Someone gives me a sample I walk away with their product. 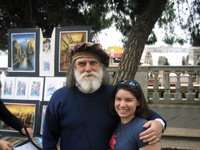 We also bought some beautiful paintings from this guy. I’m sure he sells hundreds of his paintings to tourists every year, but we loved his art and the guy was a character. His voice was boisterous and his accent was romantic and there was no way we could have walked away from his canvas without buying one (or two) of his paintings. Ah, well. They’re much better souvenirs than some goofy little snow-globe anyway. 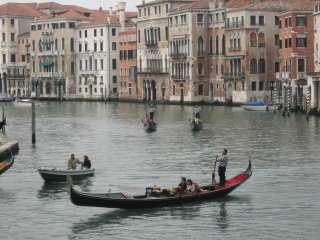 We’ve had a wonderful time in here and as much as I look forward to the rest of the trip I’m already lamenting the fact that we must eventually leave Venice. Just look at that picture. If I’d never been here and I saw that picture I’d think it was a backdrop, or the photographer had waited patiently for hours and hours to capture the perfect spot. In fact, you see things like that all the time here. Around every corner awaits another picturesque scene ready to overwhelm your senses. If I were a poet I’d probably feel compelled to write some lines capturing my love for the city”¦but I’m not, so hopefully my prose will suffice.

One thought on “Venice: I Lied…You Do Get A Venice Post”