Some of you may have noticed that sporadically I change the quote at the top of the page. The current quote reads: “God offers to everyone his choice between truth and repose. Take which you please–you can never have both””Ralph Waldo Emerson.”

I have a sneaking suspicion I’ll let this one stay for quite a while. I find it unsettlingly revealing, and while I operate daily under the auspices of seeking and never settling for less than truth, boy wouldn’t repose be nice every once in a while?

I could cite the justifications for the war in Iraq as what I believe to be an excellent example of what occurs when folks settle for repose instead of seeking to discover the truth, but a more personal anecdote will perhaps more adequately illustrate why I love that quote so much.

While speaking to a friend several weeks ago the subject of literature came up. This particular friend holds a masters degree in engineering,

so while extremely well educated in his particular field of study he never had the unique pleasure of attending many higher level undergraduate or masters level classes on literature.

At one point we began talking about The Grapes of Wrath, and my friend professed an affinity for the book, which perplexed me a bit because he is a staunch conservative and an advocate of laissez faire policies. I asked him if he knew that Steinbeck had been an active member of the Communist party before, and a bit during, the creation of Grapes of Wrath. He did not, and by the look on his face you’d have thought I’d just kicked him in the crotch.

I explained that through the text Steinbeck seeks to embolden the farmers and the autonomous worker to form the proletariat so the battle with the bourgeoisie can begin in earnest. He had read some of Marx and Engels and I could see by his face he grasped the connection, and that by helping him make said connection I had destroyed his love of the book.

I tried to tell him about the problems Steinbeck had with the Communist party and socialism in a feeble attempt to undo what I done, but it didn’t really matter at that point.

I’ve found this happens quite a bit with theology and the historicity of the Bible as well, which is one of the reasons I try not to discuss religion in an audience of people with whom I’m only casually acquainted.

Stephen Colbert uses the word “truthiness” to describe situations which only sound true, and from what I’ve seen those who’ve settled for repose force themselves to find that repose in truthiness. 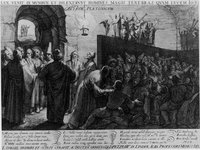 I admit that way of life would take a considerable amount of strain off the psyche (especially with our political climate), but dammit, deep down I’d always know those shadows on the wall only hid me from the beautiful sun, and that instead of eating a juicy steak I’d simply been fooled yet again by the Matrix.

2 thoughts on “Truth VS Truthiness”