Star Wars To Cleanse the Palate

Okay. I’m back in San Antonio in front of my own computer and surrounded by comic books and action figures, and I’m ready to delve into some nerdy topics. Enough with Europe and their hoity-toity classical literature. And when looking for nerdy topics to blog about what better place to begin than with Star Wars, the Pangea of nerdy topics.

Anniia asked in the comments section of the blog, “Okay, since we’ve opened the ‘Star Wars’ topic, let’s discuss. Best one? Worst one? I posit that the original, “Episode IV: A New Hope” was the standard where the bar was set, and none of the others ever met that again, and “Episode I: The Phantom Menace” was the lowest of low points.”

Anonymous weighed in and replied, “The Empire Strikes back was the best. It was dark and didn’t have any of that feel good sap that Lucas brought into the next three films. The Phantom Menace and the whatever the next waste of film was called both sucked (unless you skipped all the scenes with Anikin and Pademe). What the Revenge of the Sith lacked in plot, acting ability, and other classical criteria, it made up in action and special effects. Doesn’t make it the best, but hope lifts it off the dung heap. Which I think is somewhere in or near Waco, TX.”

Well, let’s clear one thing up immediately: the dung heap you speak of resides in Gatesville, TX. Waco is merely a stop on the road to said dung heap.

That said, I do agree that Empire is probably the most solid of all six films. The acting surpasses that of “New Hope,” Luke no longer whines like a little girl with a skinned knee, the plot twists rival that of a Grecian epic (more on this in a minute), and you don’t see one dammed Ewok. Plus, “Empire” introduces us to Lando, the smoothest mofo that ever piloted the Millennium Falcon.

Unfortunately, I don’t have as much fun watching “Empire,” as I do when I watch “A New Hope.” Sure the dialogue could kill a diabetic, and Luke desperately needs to get rid of that “Brady Bunch” hair-do, but no matter how many times I watch that movie the excitement and the gee wiz-factor still infect me like the very first time I saw it. When Luke plunges down that trench in the X-Wing and decides to use the force I’m right there with him. And when Han’s blast sends Vader flipping into space I clap and cheer like the characters on the screen can hear me.

“Jedi” is okay, but to quote Dante Hicks, “all’s Jedi had was a buncha muppets.”

I think we all agree that the prequels pretty much suck compared to the original films, but the question remains: why? Why do the first three films kick so much ass when the last three (in order of filming not sequentially) suck so totally? How could Lucas hit three home runs then bunt at his last three at-bat’s? I think Lucas simply strayed too far from the Jungian archetypes that made the first films so popular. He forgot Campbell’s “Hero With A Thousand Faces” and instead used “Primary Colors” as a blueprint for the plot. Unfortunately for him none of us really give a damn about political intrigue. We all wanted to see another Hero’s journey, and instead of “The Call to Adventure” he gave us “The Call To Closely Monitor the Political Process And Make Sure That One Faction Does Not Gain Too Much Power Because If They Do They Will Probably Abuse It.”

Plus the fact that Hayden Christensen’s portray of Anakin makes Warwick Davis’s portrayal of Wicket look positively Shakespearean. When Christensen tries to cry I want to punch a baby.

Of the three prequels I think “Sith” comes closest to containing actual drama, mostly due to McGregor’s talent as an actor. Then you have that little moment at the end when we finally hear Vader’s raspy, mechanical breathing coupled with James Earl Jones’s Vader-voice””two moments that made me glad I paid for my ticket instead of buying one to “Cheaper by the Dozen” and sneaking in.

McGregor, along with Liam Neeson and Ray Park, barely salvage “Phantom Menace.” Jar-Jar Binks and those goofy-ass Asian aliens do everything in their power to turn that movie into something Elvira would introduce on a cable station at three o’clock in the morning.

And poor little Jake Lloyd. I don’t like picking on little kids, but really, could he have been any worse? Well, I guess after watching Christensen we know the answer to that, but I’m reasonably sure there were better actors available to play little “Annie.” Lucas should have hired Macaulay Culkin. He wasn’t doing anything, and I don’t think he’s hit puberty yet. 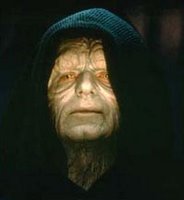 I still can’t believe that the same guy who chokes people through video-conferencing once had the nickname “Annie.” What’s next? We learn that Palpatine’s buddies called him “Palp Smear?”

I don’t think I have the strength to write anything about “Attack of the Clones.” Good Lord that was a bad movie. Lucas must’ve let the guy who wrote “Ice Pirates” pen portions of that script.

Well, there you have my flippant analysis of the Star Wars films. Just so you know, I’m no different than any other nerd out there, which means that as much as I bitch about the films I still watch them frequently enough to memorize even the cheesiest lines from “Clones.” I still secretly harbor hope that Lucas will eventually decide to film three more sequels to the original trilogy. We could see the Jedi twins onscreen and watch as Luke goes to the dark side and eventually reforms the Jedi Council. The only thing cooler than that would be to see Han and Boba have that final duel.

Whew. That’s a lot of nerdiness, no? I think it best to end this post with a link to the video of MC Chris’s “Fett’s Vette.” His backpack has jets…just in case you didn’t know.

5 thoughts on “Star Wars To Cleanse the Palate”