Ok, I’m gonna be a good little blogger and post my thoughts and impressions concerning the State of the Union address (SOTU for you political nerds), but be forewarned: if you’re looking for a fair and balanced post then you should probably surf the hell away from this page. 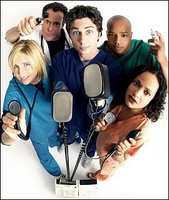 First off: Bush pissed me off almost immediately, and certainly well before he made it to the podium, or rostrum, or whatever the hell the thing was that he stood on. The SOTU began at 8:00 the EXACT same time that Scrubs normally airs, and I believe that was no coincidence. The GOP knows that Scrubs leans to the left so they decided to preempt it instead of something like WWE Raw last night. Couldn’t have anyone missin’ rasslin’.

Let me ask you this: Do they use an applause sign at the SOTU? ”˜Cause I haven’t heard applause that canned since the last time I watched an episode of Alf.

Ok, I made that last one up, but all the rest really happened.

I’m sure many folks will incessantly discuss the Democrats refusal to stand up and applaud at certain point of the address, but truthfully what did they expect? The Democrats haven’t stood up to do anything for six years so why should they start now?

Did anyone else notice the way Bill Frist followed Bush around after the address had ended? 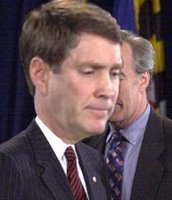 Not long after Bush walked into the audience and began totally high-fiving his buds did Frist come out of no where and began walking right behind the president. He just followed right behind him with that giant Tony Robbins head of his (it’s gotta be filled with helium) and his dumbass grin and didn’t even attempt to engage the president in any way. Presumably Frist wanted to shake the president’s hand, but I found his behavior more than a bit creepy. He was like the star struck fan that doesn’t want to bother the movie star but still wants their autograph, so they follow the star around until they end up in the bathroom with them and then out of sheer desperation they ask for the autograph while said movie star is peeing. 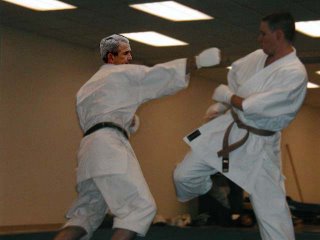 I hate to admit this, but I don’t think Bush could have said anything that would have made me go, “you know, maybe I’ve been wrong all this time because that wasn’t too retarded.” I watched the SOTU with the same mentality I use when I engage in a karate sparring match where I’m clearly out-matched: I know the other guy will try to distract me so he can roundhouse kick me in the face, so I do my level best to make it out of the ring without getting destroyed. I just wanna make it ”˜till 08 without getting my teeth kicked out. Metaphorically of course.