I’m a Stones fan for all the wrong reasons. I think songs like “Satisfaction,” “Sympathy for the Devil,” “Jumpin’ Jack Flash,” and “Paint it Black” are ok rock songs, but other than those tunes I’ve never had a particular affinity for their music. I just like the band for their antics and rock n roll attitude.

I love the fact that while Mick may have bedded thousands of women he also may or may not have had an affair with David Bowie. You don’t see that on Gene Simmon’s resume, and that”˜s why Mick’s a rock god and Gene’s only a rock idol.

I love the fact that their drummer Charlie Watts overcame throat cancer and still performs with the band. That’s rock n roll, baby. 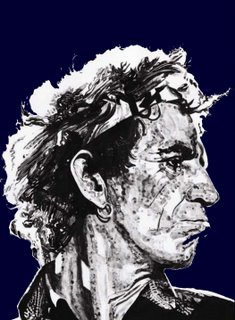 But most off all I love Keith Richards. Keith obviously made some kind of Faustian deal with the devil a long time ago, and I’m convinced that scientists will eventually find the cure for cancer hiding in his blood.

With all the drugs that Keith has ingested and shot during his illustrious tenure as lead guitarist of the Stones, not once has he overdosed and had the VH1 Behind the Music moment where he laments his debauched behavior. Only threats of jail made him “clean up.” (insert eyeroll here) Keith is truly a rock god because he never apologizes for his behavior like some other rock bands (Motley Crue I’m lookin’ at you)and he isn’t impressed by much. He called the knighting of Mick Jagger “a fucking paltry honour.” If that ain’t rock n roll then I don’t know what is.

One afternoon Leigh and I were channel surfing and I landed on an old Stones concert. They were playing “Satisfaction,” one of the four songs by them I like, so I decided to leave it on for a few minutes. Near the middle of the song a fan chased by security guards ran up on stage. Keith turned down his guitar, unstrapped it, whacked the guy in the face with the back of the guitar, strapped back on, turned the volume back up and resumed playing as if nothing had happened. If you don’t believe me you can watch for yourself; Keith doesn’t even miss a chord:

That one moment solidified the Stones place as rock gods for me.

*You get bonus cool points if you can correctly identify the movie from which my title for this post originated.