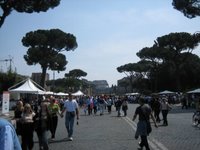 I got suckered into buying stuff from a market again. Today we had planned to take it easy and leisurely stroll around the Pantheon and Piazza Navona before catching our flight out of Rome. When we got to Via Dei Fori Imperiali we saw that the street had been blocked off and some kind of festival was taking place. We still aren’t exactly sure what the Romans were celebrating. We heard something about the Fire Brigade but we never saw any firemen wandering around, so if it was dedicated to them they decided to not show up. 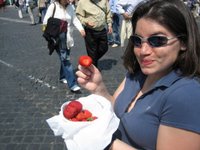 Local artisans and merchants lined the street hawking their goods. The vendors were selling fresh cheeses, homemade wine, hand-pressed olive oil, fresh fruits, smoked hams, jams and just about anything else you can imagine. I’m such an easy mark. If I take a sample I usually walk away with their product, and today was not an exception. We bought some olive oil, and some salsa and some really good fruit. Leigh bought some fresh strawberries and they were wonderful. 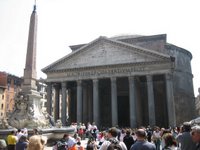 We finally made it to the Pantheon (way too crowded) and to the Piazza Navona (even more crowded), but I’m sorry to say that after the festival they kinda lacked in comparison. We had hoped to find some nice original paintings from a local artist, but everything in the Piazza seemed rather unoriginal. So we walked away empty handed. Well, unless you count gelato, but that’s pretty much a given I think.

We were due to catch a train from the Termini to the airport, which is a thirty minute train ride, at 5:00 because our plane left at 7:00. We got to the Termini and found out after we bought tickets to the train, that the train wasn’t running, but our ticket would work for the bus as well. So we paid the train price to sit on a stinky, hot, bus that took twice the time to get to the airport than the train.

Then we get to the airport and discover our plane had been delayed. Yippee.

Now, I may make someone angry by saying this but fat people should be charged more to ride on airplanes. Hold on”¦hear me out. I’m not saying people who might weigh 20, 40, hell even 60 pounds over the average weight for their BMI, but if your stomach won’t fit in between the armrests on the plane then you need to get charged for a double seat. Come on people, it’s only fair. Shit, they charge you extra if you have heavy luggage”¦what’s the difference? I had to ride all the way from Rome to Athens next to this really fat guy who couldn’t even fit in his seat, and he had the audacity to act annoyed when I kept pushing his enormous fat rolls off the armrest. Simply because I’m not an enormous fat pig (who grunts and burps constantly) I get punished because my tummy stays within my designated area.

A madman drove our taxi from the airport to our hotel. He zoomed in and out of traffic at 100 miles an hour”¦and no, I’m not kidding about the speed. My eyes stayed glued to the speedometer the entire trip.

We’ll explore the Acropolis tomorrow. I’ll let you know how it goes.

I’ve posted a few new pictures to flickr so check those out.