Hang on everyone, I’m gonna try to write a post while we’re in the air between Rome and Athens. I’m not a very good air passenger (I turn white at the slightest noise) so if at any point this become incomprehensible I’m sure that you’ll forgive me.

I didn’t post yesterday because truthfully, I didn’t have the energy to sit in our room and write up the post, download and resize pictures, figure out the layout for the post, save the file on my computer, burn it to a CD, take said CD out into the hall of the hotel, try and navigate the Italian interface of the ancient computer they had set up for hotel guests, work through my anger at the slow internet connection and Bloggers constant timing out required to complete a post from our last hotel. 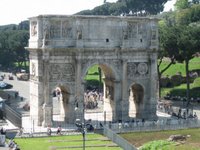 Yesterday we walked and walked and walked. If I remember nothing else about Rome it will be that we walked until right before our feet bled. We took guided tours of the Coliseum, the ancient Roman forum, and the Palantine. If you ever decide to visit any of these places, our any of the museums in Italy for that matter, you it would behoove you to get online and reserve your tickets before you leave America. If you should happen to not have tickets when you arrive in Italy you can accept the invitation of free-lance tour guides outside of each tourist destination. 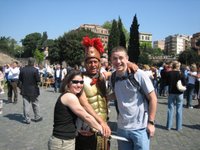 This route usually costs you a few extra Euro, but at least you don’t have to wait in lines which snakes down the sidewalks, and as an added bonus an English-speaking tour guide leads you through each site providing you with a historical context which really enriches your visit. As an added bonus you also get to take a picture with an honest-to-goodness Gladiator. They get a little smart-assy when it comes to picture takin’ though, so watch out. 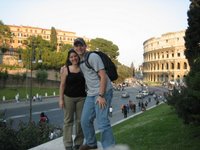 You may think that after a given period of time you might become desensitized to the majesty of the many ruins of ancient Rome”¦well, you’d be wrong. Each time you catch a glimpse of the Coliseum, the ancient Forum, or the dome of St. Peter’s Basilica you see something new and inspiring. I challenge anyone to stroll down Via Dei Fori Imperiali with the Forum on their right and the Coliseum rising up at the end of the street in front of them to not feel the dense weight of Rome’s long history pressing down upon them like a thick blanket. The mere fact that people have walked that same road for thousands of years makes me feel a little inconsequential. 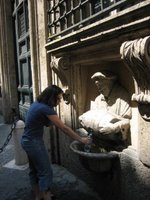 Here’s another quick tip for you would-be Rome travelers: Rome boast hundreds of public fountains from which you may drink or refill water bottles, and the water from them tastes better than most commercially available bottled water. Only uninitiated tourists pay for water in Rome. The veteran tourists and the Romans drink out of the free fountain water. 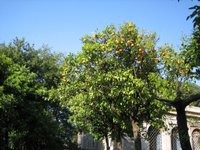 We saw some Orange trees in the garden at the Palatine. This Texas boy had never seen Orange trees before, and I tried and tried to jump high enough to knock one down. Leigh dissuaded me from throwing my shoe up into the tree to hit one (that’s what I used to do to get pears out of a tree in one of the many pastures my father owns). 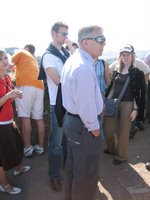 It’s really amazing that any of the ruins of Rome still exist. The Christians did their damnedest to destroy anything they could (you can still see indentions on many of the remaining columns where they attached ropes in an attempt to pull the temples down), 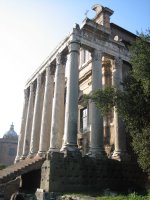 and looters of the Renaissance recycled much of the architecture to build other things. For example, Michelangelo viewed the Coliseum as a quarry while constructing St. Peter’s Basilica. So much so that the sides of the Coliseum remain black to this day from the smoke which pillowed out of the massive smelting pits Michelangelo built to melt down masonry to use on the Basilica. The ashes from those pits raised the level of the floor five feet. On the temple here you can see the indentions I mentioned previously. Thank goodness Roman construction proved too strong”¦in that particular case at least. 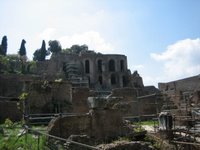 Many archeological digs are ongoing and right now only twenty percent of the Palatine (the site where Romulus directed the first Romans to build a city and where emperors such as Domitian, Octavius, Tiberius and Caligula built a massive palace) has been excavated. When you look at the cleared section of the Palatine and realize that a portion eighty percent larger than the one you’re looking at still hides under the ground your jaw just hits the floor. 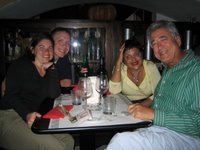 We ended the night by meeting up with the couple we had met the day prior at a jazz club called “Alexanderplotz.” We had dinner and listened to a really spectacular jazz band. After that we went home and went to sleep. Walking all day in the Roman heat really tires you out.