You ever see something you wish you hadn’t? And later on you became haunted by the image that seemingly burned into your consciousness and kept pushing itself to the forefront of your brain? Maybe a picture of yourself with an ex, a dead dog on the side of the road, or a half-eaten bug in the fresh bite off your burger? I saw something like that last night, and here it is: 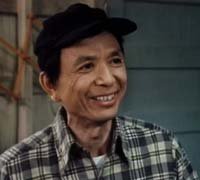 No big deal you say? Just a guy in a ballcap? No, that’s not just a guy. That’s James “Lo Pan” Hong from the phenomenal movie “Big Trouble in Little China.” See, this is what he normally looks like: 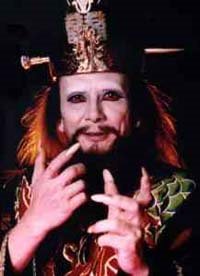 Now why did that first image disturb me? Because, I screen-captured that off an episode of “The Dukes of Hazzard,” titled “Miz Tisdale on the Lam” where Mr. Lo Pan plays Billy Joe Fong.

Get it? “Billy Joe,” ”˜cause he lives in Hazzard and it sounds more than a little hickish, and “Fong” because it rhymes with “Dong” and that’s what I imagine he felt like while playing this character. When we first meet Billy he’s in the midst of borrowing Cooter’s welder to repair his wok. And no, I’m not making that up. 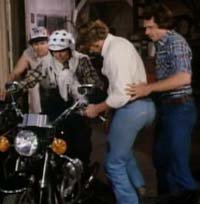 Billy Joe Fong spends the episode acting as a decoy for Miz Tisdale and riding around on her side-car equipped motorcycle so as to distract Boss Hogg. He drives rather crazily, swaying this way and that, 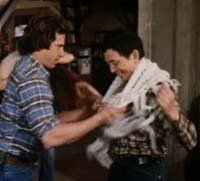 all while screaming Chinese-sounding gibberish, and is perpetually in a collision course with something, whether it be Bo and Luke or Rosco’s police car. This character couldn’t be more stereotypical and clichÃ©d if Mickey Rooney were playing it.

At the point in the show where I screen-captured Billy Joe Fong, or BFJ as his friends call him, he has just invited Bo and Luke to eat dinner with him, which consisted of “Southern Fried Wontons, Sweet and Sour Hog Chaw, and Chitin Chow-mien.” Again, I’d like to emphasize I did not make that up.

I sincerely hope that the writer and person in charge of casting this episode were punished for this nonsense by being drug off to the hell where people are skinned alive.

If anyone needs me I’ll be in the bathroom washing my eyes out with bleach.