Let me preface this post by explaining that what you’re about to read I wrote in the plane ride home yesterday. Right now it’s Wednesday afternoon, so if this paragraph and the ones that close this post seem a bit more lucid and comprehensible you’ll have a pretty good idea why. Sleep does a body good.

On with the rambling:

Right now I’m 40,000 feet in the air cruising at a very respectable 536 miles per hour in a Boeing 777. I don’t freak out too bad on the big planes like this. They usually fly high enough to avoid most of the turbulence, but we did hit a bad patch a little while ago. I pried my fingers off the armrest long enough to write a short post. 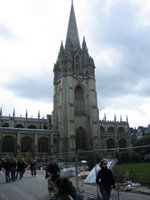 It made me sad to leave Oxford this morning. I could have happily stayed there for quite a while. While walking through the city I liked to imagine Tolkien and Lewis and Carroll walking those same streets more than half a century ago, finding inspiration in the architecture of the buildings, the intellectual conversations in the pubs, and in the very spirit of the city itself. I think I said two posts ago that when I discovered that the same collegiate jackasses that you can find at every other university attend Oxford as well I felt a bit disappointed. Reality once again ruined a perfectly good fantasy. (That’s St. Mary’s Church in Radcliffe Square). 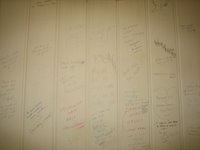 Well, I take that back. It’s true that we saw our fair share of jock meat-heads and vacuous girly-girls. But I felt renewed when I saw this graffiti in the bathroom of a pub. Where else can you go but Oxford where graffiti artists pen their lines in Latin and admonish each other over their grammar? Enlarge that photo and you’ll see that someone wrote “I demand to have some booze,” and someone else wisely corrected him and offered this in response, “Too passive voice. Say, ”˜I demand booze!’”

I also greatly admire the epistemological route the University takes in regard to curriculum. Students don’t really go to classes, per se. They meet with a tutor, or what we would call an instructor, once a week for several hours. During this meeting they go over the student’s weekly writing assignments and discuss and debate their weekly reading assignments. Depending on their chosen field of study the student may need to meet lab requirements of some sort, but for the most part the student sets their own pace. For someone like me who loathes lecture courses this would be great.

Not to mention the pure aesthetic beauty of the city and the individual colleges. You see, there is no central Oxford University campus. Some thirty-nine colleges comprise Oxford University, and each one has their own grounds so each college has its own distinctive personality. 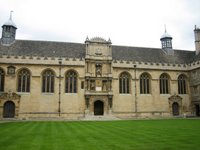 Tall walls and buildings surround each college forming something of a fortress, and to enter you must first pass through a guard door. Once through the door you enter into the quadrangle, which is surrounded on all sides by living quarters and classrooms. Each quadrangle is beautiful. There are flowers and trees and benches, and because walls and buildings surround the quadrangle on all sides an atmosphere of serenity pervades the whole area and insulates it from the bustling city just beyond the walls. I imagine that sitting in the quadrangle while musing on a particularly nagging problem must be very comforting, indeed. I took this picture in Wadham quadrangle which began teaching students way back in 1613. 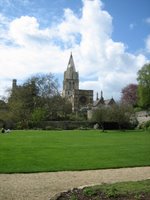 The first written mention of teaching at Oxford appears in a manuscript from 1085, but we do know that a monastery occupied the original grounds as early as 700 A.D. If the beauty of the school and its illustrious academic career don’t happen to impress you much then perhaps the fact that large portions of the Harry Potter movies were filmed there will. You’ve seen the dining hall of Christ’s Church (that’s the back of it in that picture), because it’s the same dining hall where Harry, Ron and Hermonie all eat. They study in the Bodleian Library, and the Divinity School doubled as Hogwarts medical facilities.

Okay, you’re back in the present day now. That’s all I got down before we started hitting turbulence again and I freaked out. I’m really a terrible air passenger if you haven’t figured that out by now.

We’re glad to be home, and we’ll be even happier when we pick Ellie up from my mother’s. We were also glad to eat lunch at Taco Bell today. Italian cuisine is great and all, but sometimes you just need to make a run for the border.

Yeah”¦that was bad. Sorry. I’m still a little punchy from the flight.

I want to thank all the readers who visited the blog daily while we were on vacation. Seeing how many of you were hitting the page each day really touched me. Your visits made those nights when I struggled to write from exhaustion caused by walking all day or enduring air travel, all worth while. Thank you.

I’ll also begin responding to emails and comments now with a bit more regularity. I’m sorry that circumstance prevented it before.

We’re at Leigh’s parents now and in a couple of days we’ll visit my parent’s, and then on Sunday we’ll be back in good old San Antonio. So I’ll continue to post, but after Sunday Hyperliterature will completely return to normal.