Late last night I posted an idea for spicing up the Olympics and making them more exciting to watch. After re-reading the post in the light of day I realize my idea seems a little”¦well”¦sleazy, if you will. So in response to myself I’ve come up with another idea which I think will appeal not only to the perverted but to the average viewer as well.

We make all participants dress as super heroes.

Who wouldn’t want to see the Incredible Hulk perform a delicate figure skating routine? Pair him with the Sensational She-Hulk and you’ve at a couples team destined for Olympic gold. What could be more exciting than watching the billowing cape of Batman hurtling down the luge at dangerous speeds?

Apparently I’m not the only one to think a mingling of superheroes and Olympic events would be a good thing. A Colorado based ski-wear company recently introduced their new ski suit, dubbed “d30,” into the highly lucrative and extremely competitive ski-wear market. As you can see they’ve gone with the “Skiin’ Spidey” look, and I think it’s just fabulous: 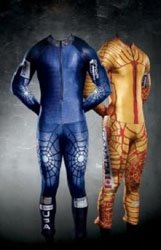 They’ve not only taken a cue from the comics world in designing the aesthetic aspect of the suit, but they’ve also designed the suit to function in ways normally only seen in the suits of comics characters.

The description of the suit states: “The resulting material exhibits a material property called “strain rate sensitivity”. Under normal conditions the molecules within the material are weakly bound and can move past each with ease, making the material flexible. But the shock of sudden deformation causes the chemical bonds to strengthen and the moving molecules to lock, turning the material into a more solid, protective shield.”

If that doesn’t sound like a material designed by Reed Richards or Tony Stark then I don’t know what does. Unstable molecules eat your heart out.

I’ll get back to you on that.