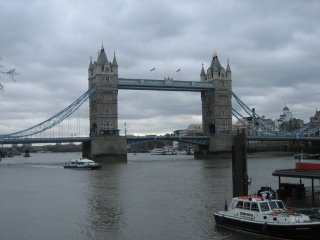 We had a very interesting day today. This morning we took a tour of Tower Bridge. Horace Jones designed the bridge at the end of the nineteenth century, but unfortunately he never lived to see his creation. His ingenious design allowed pedestrians to cross the Thames by providing them with the walk-way at the top of the bridge which remainded in place even while the bottom section see-sawed up to allow ships to pass under the bridge. You should have seen the hydraulics that raised and lowered the bridge, which incidentally operated until mid-1970 when they replaced them with electric motors. 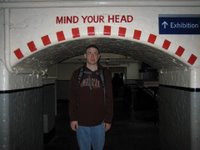 Unfortunately I’m much taller than the dwarf workers who originally operated the bridge. As you can see I barely fit through any of the doorways without brushing my noggin against concrete. I find it hard to believe that our average size has increased so much in the past hundred years. I feel like a giant everywhere we go. 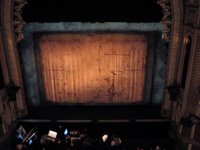 After the bridge we attended the play “The Wolves in the Walls.” Neil Gaiman adapted the play from his children’s book of the same title. We had a blast at the show. Neil may have written the story with kids in mind, but the play kept these two adults delighted for an hour and a half. The wolves ran around on stage mischievously, and while I don’t normally do very well in large groups of children, I have to admit that their laughter was infectious. They even incorporated Dave McKean’s artwork from the book into the stage design.

Just before the play began the announcer told us that Neil Gaiman was in attendance and would hold a Q&A after the show. I may have peed in my pants a tiny bit after her announcement. So after the show we went into a small room and Neil came in and answered questions and discussed the performance. Most of the questions were from very small children and were along the lines of “What’s your favorite thing about writing?” Leigh told me to ask a question, 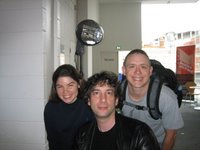 so I asked Neil his views concerning the function of allegory in fiction (he distrusts it), and I succeeded in getting a bunch of kids turning around to stare at the yank who asked the pretentious question. Neil did seem glad to answer a grown-up question though. After the Q&A they announced that Neil would gladly stay to autograph a few things, and oddly enough not many people did (I suspect the kids had gotten antsy). Neil signed our programs and chatted with us for longer than I expected. We even got a nifty photo.

After the show we went back to the British museum to try and see a little more of the exhibits. The size of the museum makes me feel a bit disheartened because I know that no matter how fast we look through things that we’ll leave without having seen the whole museum. Some of the exhibitions I wanted to see were closed which was even more frustrating. 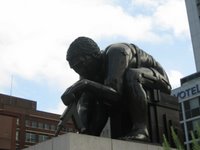 Oh, I forgot about the British library. We went there, too. We saw one of the earliest copies of Chaucer’s “Canterbury tales,” two of the earliest Greek translations of the New Testament (that’d be the Codex Sinaiticus & Codex Alexandrinus), an original copy of the King James Bible, Joyce’s handwritten pages for “Finnegan’s Wake,” one of the Guttenberg Bibles (we also have one in Texas at the HRC in UT), Shakespeare’s First Folio and a lot of other original manuscripts. I spent most of the time staring at the “Canterbury Tales.” I’m easily amused. That statue of Newton sit at the front of the library. It’s from a painting of Newton by William Blake. I don’t remember who completed that statue, but I thought it looked cool.

We also visited the National Portrait Gallery. I couldn’t believe what Milton looked like. I guess I always envisioned him looking rather brooding and scary, but instead he looked like a character from “Prince Valiant.” Kinda disappointing.

At dinner I order nachos funditos and Leigh ordered cheese quesadillas. And yes, I know we’ve been spoiled living in San Antonio as far as Mexican food goes, but damn. I guess it was Mexican food”¦at least in theory. 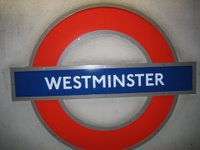 We left the restaurant at the same time the theaters let out so a lot of people were vying for a place on the train. A young guy cut in front of an old man and the ensuing argument provided entertainment all the way to our stop. The old man was”¦well, irascible is a good word”¦or maybe curmudgeonly”¦oh, I know: bitchy pain in the ass. Yeah, that describes him perfectly: bitchy pain in the ass. He kept telling the guy who cut and then took the last seat that he was “scum,” for cutting in front of him and the guy’s friend egged the old man on the whole time. “Yeah, you are scum. Why’d you cut in front of him?” The guy got up and offered his seat and the old man got even more upset.

It was a good time.

Well, all except for the shitty waiters and the rude tourists who never say “excuse me” or “thank you.”. I won’t miss them.