We saw Lewis Black perform tonight at the Majestic Theater in downtown San Antonio. He put on an awesome show. I’ve seen all his specials and heard all his CD’s, but nothing compares to Lewis live. Here’s some YouTube clips if you’ve never seen Lew. 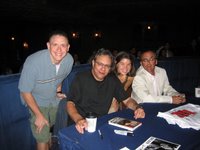 I’ve got a friend who doesn’t like Lewis because of all his anti-Bush material, but when Clinton served in office Lewis attacked his idiocy just as violently. At one point during the show an audience member made a remark that sent Lewis into a tizzy. 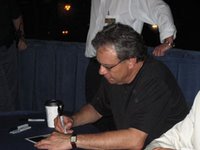 I couldn’t hear what he said, but it must have been something to do with Bush hailing from Texas because all at once Lewis broke into an impromptu bit about Bush, a Connecticut-born Andover-prep-school attendee and Yale graduate, suddenly becoming a “rancher” when it suited his political career. Lewis handled the hecklers hilariously, even the two shitheads who let their cell phones ring during his act.

After the show Lewis hung around and signed autographs and chatted with fans. It was kinda odd to see him actually smile and joke around, since he comes across so angry during his act.

Just an aside, but we saw one woman who literally had to have her boyfriend drag her out of the theater because she was so drunk. I’m all for having fun and everything, but why would you spend forty bucks on a ticket and then get so shit-faced that you couldn’t remember the show? Seems like a waste to me.