I’ve resisted the urge for several weeks to post this video of a house where the owners have hung massive amounts of Christmas lights and then synchronized them with music from Trans-Siberian-Orchestra. You may have even seen this already because this video has been making the ”˜net rounds lately; I’ve received it in several email forwards myself. This video is quite spectacular, so much so that I didn’t post it because the synchronized light show was so fantastic, so spectacular I was convinced it was digitally manipulated.

Well, I was wrong. The video wasn’t digitally manipulated, and according to this article from The Cincinnati Enquirer it took the owner of the home, Carson Williams over three hours to program one minute of light/music synchronization. I apologize for my reluctance at posting this”¦I promise to keep my readers informed regardless of my ignorant biases”¦well, “promise” might be a strong term, maybe “I’ll make something of an effort” will be more accurate. 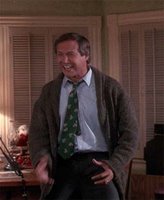 In a related story, Clark W. Griswold released this statement: “I’d like Carson Williams right here, tonight. And I want him brought from his happy-holiday slumber from his home on Winding Court Creek road with all the other rich people”¦and I want him brought right here”¦with a big ribbon on his head! And I wanna look him straight in the eye and I want to tell him what a cheap, lying, no-good, rotten floor-flushing, low-life, snake-licking, dirt-eating, inbred, over-stuffed, ignorant blood-sucking, dog-kissing, brain-less, dick-less, hopeless, heatless, fat-assed, bug-eyed, stiff-legged, spotty-lipped, worm-headed, sac of monkey-shit he is!!! Hallelujah! Holy Shit! —– Where’s the Tylenol?”