If I Could Reach Through This Screen…

In one of the last papers I wrote for grad school I examined the impact of blogs on the mainstream media, paying particular attention to blogs authored by embedded soldiers. I was particularly interested in the antagonistic relationship between traditionally trained journalists and bloggers, and the perception of truth as it applies to both of those public roles. Through my research I found that one of the major critiques journalists have with the blogosphere and bloggers in particular is the lack of any editorial oversight and the danger that anonymity provides the denizens of the ”˜net.

In my mind the freedom of expression the blogosphere offers us outweighs the potentiality for misuse and evil, but sometimes I too think that the anonymity of the net empowers people and affords them the opportunity to act in ways they wouldn’t dare if they had to look you in the eye.

Case in point: On December 1st I posted an entry about Brad Vice. I’m not going to summarize the whole thing because you can go here to read the original post, but needless to say he did some unscrupulous stuff and for several weeks you couldn’t visit any blog filter without seeing his name. In fact, I initially found out about him from this Metafilter post. I read the little entry and several of the accompanying links, posted about it on a whim as a respite from real studying, forgot it, and went on with my life.

Fast-forward several weeks”¦tonight I open my mail to find that I have a comment on the blog. Well, I very rarely get comments at all, and I can’t properly convey to you my excitement at having an actual comment, so with enthusiasm I opened the email and sadly found that the comment isn’t good at all; it’s sarcastic, slightly mean, and meant to piss me off.

Look Mr. Anonymous, I didn’t know who Robert Clark Young was before I read that MeFi post, and I could give less than an ounce of crap who he is now. I was in the middle of finishing up my grad degree when I read about Vice’s plagiarism and it pissed me off, so yeah, I probably did have about the same opinion of him as other bloggers. But thanks so much for trolling by anonymously a month after I posted that and leaving me an uplifting comment on a blog that I take a lot of pride in writing. Unfortunately, you lacked the courage to leave an email address or a link to your blog, thereby denying me the opportunity to answer you in an appropriate manner and forcing me to answer you publicly on the blog.

So here’s to you Mr. Chickenshit”¦ 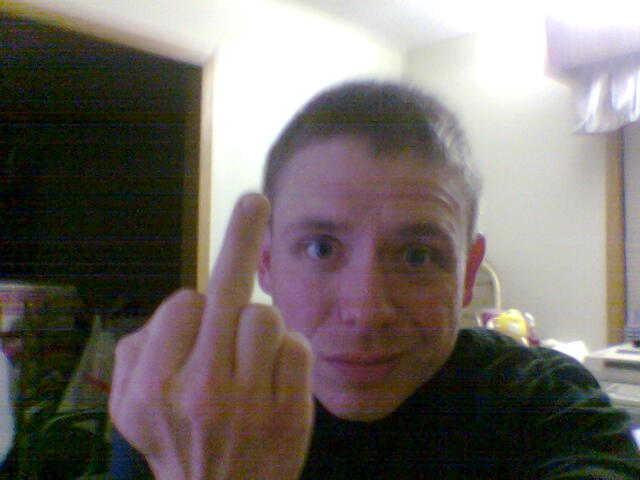 next time you feel like being a dick and ruining someone’s day stroll on over to your bathroom mirror and give the fellow in front of you a big ”˜ole wave. You have my permission to be as mean and hateful to him as you like”¦in fact, I hope your anger and self-loathing drives the guy in front of you into a severe depression, and he goes out and hires a hooker in hopes of alleviating the pain, only to find out several weeks later that during those few guilty moments of pleasure he contracted herpes, and while cleaning out his basement bedroom his mother finds his herpes medicine and she becomes concerned and asks the local priest to come by and counsel her hooker-hiring, internet-addicted, hairy-palmed son, and when the priest arrives he finds the guy in his bedroom in his dirty underwear, passed out drunk and surrounded by Hustlers and Herpes cream.

Moral of this story: If you have something to say on the Internet consider whether or not you’d say the same thing to a stranger in real life. If you wouldn’t then keep your fingers off the damn keyboard and leave people alone. Also, try to remember that real people blog, and the smaller the blog the more the author looks forward to comments, so keep that in mind when you think of something you just have to say.

3 thoughts on “If I Could Reach Through This Screen…”