While sitting on the couch surfing the internet on a laptop and languishing in my post-holiday session of binge-eating, and simultaneously enjoying a rerun of South Park, I began to notice an abnormal amount of commercials for “Bowflex.” I’d hate to think advertisers are taking advantage of the fact that most people eat during the holidays as if they had entered some kind of contest, but the amount of times I’ve seen the commercial run really makes me wonder. 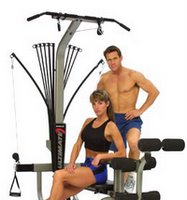 What I like most about the commercial is the fact that in the time it would take to order the “Bowflex,” wait for several days before you find out shipping has been delayed, receive the stupid thing after yelling at the stooges at customer service for days and days, let it sit in the big-ass box for a week or two, finally work up the courage to open the box and begin putting it together, recover from the injury sustained while assembling it, read the directions and learn how to operate those lethal looking cables, you could have gotten up off your ass, sat down and worked out a sensible meal plan, jogged around the block several days in a row, and actually lost several pounds. 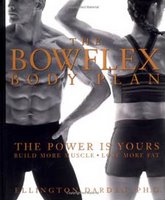 I also love the fact that the PR folks at “Bowflex” couldn’t find any actual customers who lost weight with their machine to give a testimonial, so they hired the genetic freaks that appear on the commercial to parade around and flex in all their mesomorphic-glory. You’d have to be mentally damaged to think that working out three times a week on a cable machine might actually transform your body into the same shape as the two Greek statues working out on the commercial.

Here’s an idea: eat sensibly and every once in a while participate in an activity which forces you to move around a little bit. If you’re really motivated avoid the complications of putting together a machine which will inevitably end up as a place to hang clothing and join a gym. Either that, or simply revel in your fatness”¦eat what you want and don’t let “Bowflex,” “Trimspa,” “Leptoprin,” “Stacker,” or any other cure-all make you feel guilty.

”¦now back to South Park.