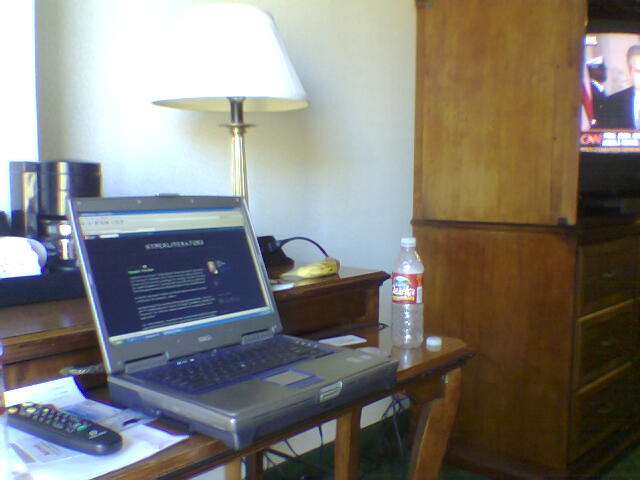 I’ve spent about four days at home since December 7th, which means I haven’t had the luxury my computer affords me during internet excursions, so I don’t have that many leftovers to serve. FYI: When hotels advertise high-speed internet they’re lying. I would characterize this connection as “high-speed” only if I were comparing it to a 300 baud modem. I’ve found that logging onto unsecured wifi networks usually results in a faster connection than those offered by hotels (and unsecured networks are always free, unlike hotels). Remember kids, secure those wifi connections ’cause piggybackers like me are out there, and dammit we’re always searching for new networks to leech!

Things will return to normal here on Hyperliterature shortly, I promise. ‘Till then enjoy these leftovers:

Kevin Smith finished filming Clerks 2 several weeks ago, and recently he posted the first trailer for the movie. All reservations aside, I love seeing Jay dance like a psychotic again.

Dave Barry publishes a very funny blog and occasionally his weather correspondent Walter, contributes as well. Walter is one of those fearless weathermen that throws caution to the wind and reports in the midst of storms. Oh, I think I should add that Walter is a walrus penis-bone, who likes to wear hats. Apparently fossilized penis-bones are viewed as collectables. And I thought collecting actions figures was a bit weird.

The Prejudice Map. “According to Google, people in the world are known for”¦” That page looks like a G version of the Wikipedia entry for racial slurs. Don’t worry, that entry contains a slur for just about everyone, and as we all know, if you offend everyone equally you’re not a racists you’re just an asshole.

Google released “Google Pack” several weeks ago. From Google: “Google Pack is a free collection of essential software from Google and other companies. The software in the Google Pack helps you browse the web faster, remove spyware and viruses, organize your photos, and more. Learn more about each of the programs in the Google Pack.” Some very useful stuff in that download so check it out.

“Kid’s Letters from Terrorist Camp.” I’d like to see Ernest bumble his way through Camp Taliban.

If you haven’t noticed by now I’ve made it my personal mission to legitimatize comic books to my fellow literati. For those who don’t want to spend money on a medium you’re unsure of you can read Warren Ellis’s graphic novel “Fallen” on-line for free. The solicitation for the issue reads:

“Detective Richard Fell is transferred over the bridge from the big city to Snowtown, a feral district whose police roster numbers three-and-a-half people (one detective has no legs). Dumped in this collapsing urban trashzone, Richard Fell is starting all over again. In a place where nothing seems to make any sense, Fell clings to the one thing he knows to be true: Everybody’s hiding something. Even him.”

Ellis has written some groundbreaking stuff such as “Transmetropolitan,” “Hellblazer,” “The Authority,” “Planetary,” “Global Frequency,” some really good Ultimate titles for Marvel and much more. Go read it.

That’s it for now. Just so you know, I wrote this post while President Bush conducted his press conference with German Chancellor Angela Merkel. I hope you appreciate how difficult it is to write while the black hole of verbosity sucks the creativity out of you via CNN. The president just asked a reporter to repeat his question because “sometimes I mix’em up.”