Florence: The David And Roundhouse Kicks To The Face

I’ve decided I like traveling by train much more than by car. Obviously on a train you don’t have the luxury of stopping whenever the mood strikes you, but at least you can spend your time in transit doing something productive. We caught a train in Florence this afternoon, and between Florence and Rome I listened to two Ricky Gervais podcasts.

Well, I suppose I could have done that in a car too, huh? Maybe I could have, but the train ride also afforded Leigh the opportunity to take a rejuvenating nap. Hmmm. She does that when we travel in a car. In fact she’s usually asleep before we hit San Antonio city limits.

Regardless, we spent two hours on a train traveling from Florence to Rome. We did have the unfortunate luck to have seats right behind a very large group of Italian teenagers, and let me tell you, teenagers are the same no matter what country they’re from. On the bright side one of them dropped a five Euro note which Leigh happened to see. And no, we did not return it. I considered it payment for enduring two hours of their incessant prattling, their constant movements in the seats in front of us, and for generally making obnoxious asses of themselves.

This morning we visited the Galleria dell’Accademia which holds Michelangelo’s “David.” We purchased tickets the day before and this morning we arrived at the museum a bit earlier than our tickets indicated. When we asked a guard where we needed to form a queue he ushered us right into the museum in front of a large group of people. He spoke almost no English and I don’t know what he thought I asked him, but whatever it was got us into the museum very quickly. 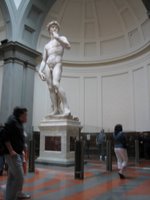 When we got inside we went to see the “David” straight away. Michelangelo’s famous sculpture sits in an open hall underneath a great skylight. The walls are a light blue color with white accents, and between the color scheme and the size of the hall a feeling of serenity pervades the atmosphere. I noticed the size of the sculpture as soon as we walked into the room. I’ve seen countless photographs of the sculpture but never before had I been so aware of its massive size. It stands over eighteen feet tall. The size of the thing is simply mind-blowing. 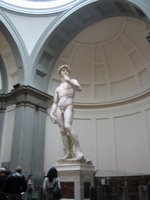 After I got over the size I then began to pay closer attention to the level of detail in the sculpture. Michelangelo imagined David as having just killed Goliath, and his sculpture stands with his sling casually draped over his shoulder and David holds a second rock in his right hand. Before I saw it in person I always thought of the “David” as a serene piece of art, but nothing could be further from the truth. He looks as if he’s been rolling that rock around in his right hand over and over, preparing for the possibility that he might need to hit Goliath for a second time. Most of his weight rests on his right leg, and he seems ready to pivot on that leg and strike or launch another rock at any given moment. His face carries a look of proud determination and a touch of authority I never noticed in any of the photographs. He looks like a mass of potential energy simply waiting for any opportunity to burst forward with incredible speed.

It’s an amazing piece of art. We sat and stared at it for a long time. But that damn museum has the most effect guards of any museum we’ve visited thus far. I popped off two photos and while in the midst of snapping the second a guard appeared out of nowhere to reprimand me. I say nowhere, and I mean nowhere. We spent a goodly amount of time casing the joint out and there were no guards in sight, but the moment I pulled my camera out of my pocket one simply appeared. I think she may have teleported that’s how fast and unexpectedly she appeared before us. Anyhow, I got two shots, and as you can see both of them are rather fuzzy.

After seeing “David” we perused the other pieces at the museum, but really, we went to that museum to see “Dave” and after we saw him neither of us felt entirely up to another full day of art. 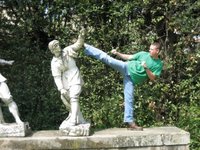 Since the sun suddenly appeared today we decided to spend the remainder of our time in Florence strolling around the Boboli Gardens again. After our last visit we looked at our map and discovered we had only seen about half of the enormous gardens. 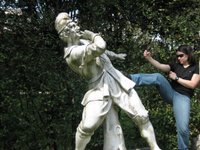 We had a relaxing time just wandering around and exploring the many trails that wind through the lush hills. We did encounter some obnoxious folks along the way, and unfortunately an argument devolved into some serious fisticuffs. Don’t worry. Our training paid off and we soundly trounced the belligerent ruffians. They weren’t expecting roundhouse kicks to the face”¦but then again not many people do. 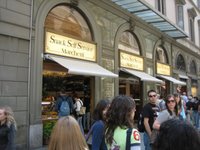 I would like to mention that if you ever go to Florence DO NOT eat at this place. If you must eat there, and only God knows why you would, DO NOT order the Tiramisu. I know what you’re thinking: Geez, Mark, how could they f-up Tiramisu? That’s what we thought. But then we took a bite out our dessert, which incidentally looked creamy and delicious, and much to our chagrin discovered that instead of lady fingers soaked in either espresso or rum they had instead used Alpo. At least I think it was Alpo. I hope that it was Alpo. At least Alpo is a consumable foodstuff.

So we’re in Rome now, and tomorrow we plan to go to the Sistine Chapel and St. Peter’s basilica. Unfortunately, I don’t have wi-fi or broadband access in our room, but the B&B does have a computer set up for internet access down the hall. So I’ll write up the posts on my pc then post them with theirs. Just don’t expect a lot of pictures on flickr or any link dumps until Sunday night when we arrive in Athens.

3 thoughts on “Florence: The David And Roundhouse Kicks To The Face”