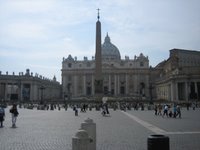 We spent almost the entire day at the Vatican. I can’t even think about looking at another piece of art. 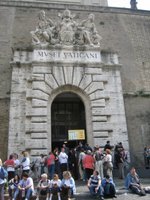 I’d like to reiterate that I don’t understand the “no photos” rule most of these museums we visited seemed to have adopted. I’d like to think they originally instituted that policy because flash photography posses the ability to damage the paintings, but two facts lead me to believe otherwise: 1) They allow you to take photos of certain paintings sans flash, so obviously they recognize and allow for that possibility. 2) They don’t want you to take photos because if you do then you’re less likely to spend 30 Euro on an overpriced gift book. 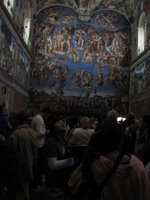 Unfortunately for them, I’m a covert photographer. In fact, I’d go so far as to call myself a ninja-photographer. We visited the Sistine Chapel and St. Peter’s Basilica today, and the photo-nazi’s were in full force inside the Sistine Chapel. Oddly, they only worked inside the Chapel proper; you could take pictures everywhere else. Hmm, I wonder if that has anything to do with the fact that they sell a huge book on Michelangelo’s paintings on display at the Sistine Chapel at every one of the 500 gift shops inside Vatican City? 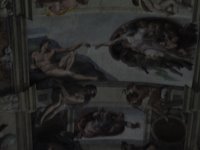 I’m not sure, but I believe that gift shops outnumber exhibits at the Vatican Museum, and I’m also reasonably sure that the Vatican contains more shops than the mall in Waco, Texas.

Regardless, I got several dark, crappy photos of the Sistine Chapel. Had they not told me I couldn’t take pictures I probably would have been content to simply gaze up at the art, but since they challenged me I felt obligated to answer in kind. (Hey, I said never said they were good pictures…I said they were covert)

Leigh and I talked about what I could say about the Sistine Chapel, and we both came to the same conclusion: nothing I say nor any picture I could post would ever do justice to the masterpiece Michelangelo created. I’m reasonably sure Michelangelo created the greatest piece of art on Earth”¦period. You have no idea the scope and detail of the paintings on the ceiling and the walls of that rectangle Chapel. You could spend a year of your life gazing in awe at everything in that room and never fully grasp the significance or the brilliance of Michelangelo’s paintings. 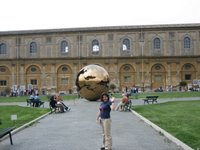 Just in case you decide to visit the Vatican in the near future you should know this: the Vatican Museum is the most confusing place on the planet. Signs lead you astray, guards don’t speak English well enough to truly help you, and the tour book contains such a poor map that I wonder if the cartographer had ever actually been to the museum. I can’t even remember the number of times we got lost and inexplicably ended up in this garden area. Don’t get me wrong, the garden area was lovely, but after several times of accidentally ending up there you feel a little like ripping up the flowers and defecating on the grass. Or maybe that was just me.

After several hours at the Vatican museum I needed to get away from the art for a while. I felt like I’d overloaded on the priceless art yet again. If anyone ever asks you if it’s possible to O.D. on art you can tell them from me “yes.” 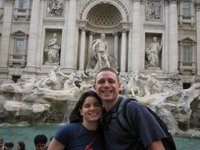 We left the Vatican and took the metro to the Spanish Steps. Rome has a decent subway system, but it’s nowhere near as efficient and intricate as London’s, as we would find out at the end of the evening. From there we walked to the Trevi Fountain where a nice couple took our photo for us. Some guy tried the old “give-the-woman-a-rose-then-make-the-man-pay-for-it-when-she-touches-it” gag on Leigh, but sadly for him she knew what was up. We didn’t dawdle at the fountain because we had made reservations for dinner and were running just a tad behind. 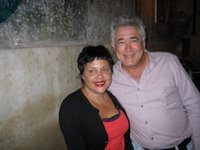 We had dinner at a place called “Otello alla Concordia.” It sits about half a block away from the Spanish Steps off the main street in a little conclave-like area. We were seated next to another couple who turned out to be from America as well. Florida, as a matter of fact. Their names were Lois and Bob, and we ended up having a wonderful dinner with them. 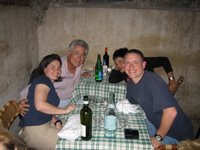 We talked and joked and had a splendid evening. Lois even shared a bit of her Eggplant Parmigiano with us, and who really shares these days? (I’m sorry that my big water-head obstructs Lois from the picture.) After we left the restaurant Leigh and I briefly considered joining them for drinks at a Jazz club, but when we went to get on the Metro we discovered it closed”¦at 9:30 on a Friday night for goodness sake. How uncivilized.

We had to take a cab back to our hotel, and the car ride reminded me why we’ve steered clear of taxis since we’ve been here. They drive like freaking maniacs and crazy people. We almost hit a guy on a scooter on the way home. How does that work I wonder? If your driver kills a guy with you in the car does that somehow make you an accomplice? Or do you just consider your fare null and void and hop out to immediately hail another cab, thereby leaving your cabbie to deal with the police all alone?

Tomorrow we visit the Colosseum and the Roman Forum, and whatever else can we fit in the daylight hours. Sorry, no link dump tomorrow. Since we don’t have internet access on my laptop, much less in our room, I can’t really tag stuff for the dump or post any pictures for the flickr photostream. I’ll update those two things when we get to Athens on Sunday.