East Tennessee State University recently kicked a cheerleader off their cheer squad for working at Hooters. Apparently, they didn’t think that employment at Hooters was a very noble thing and quickly sought to disassociate themselves from the unrefined waitress. Click here for the full story.

Two things on this:

2. Leigh worked as a physical trainer for the football team of a southern Baptist University we both attended (it rhymes with “Mayler”) and judging from the stories she heard and witnessed if serving chicken wings and watered down beer were the worst thing this girl did then she’s practically a saint in the collegiate cheerleading world.

The end of the article quotes a representative of Hooters as saying “”it’s a black eye” if the team doesn’t welcome Sams back.” That quote brought to mind this sign that we saw hanging in the tube stations in London: 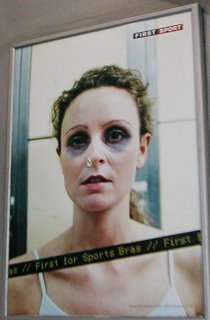 Be sure to enlarge that because the caption at the bottom is the funny part.

3 thoughts on “ETSU vs Hooters”