Many years ago when I took a journalism class one of the things I remember learning was that the most vocal and impassioned voices heard in the media usually come from minority groups, and centrists don’t usually become the focus of news stories. The theory was that the folks who were repressed or marginalized usually screamed the loudest and those who were content didn’t have anything to talk about.

I would like to talk to a journalism professor now and see if that theory still holds up or if it has become inverted. It seems to me that the ones who are screaming now are still those with radical thoughts not necessarily shared by the majority of people, but instead of screaming from the margins to the center they are now the center.

For example: stem-cell research. Polls show that the majority of people recognize the importance of it and want our scientists to move forward however they see fit. Unfortunately, the wingnuts bitch and scream about the “sanctity of life” and other nonsense rhetoric in that same vein, and are successfully preventing the majority to move forward with what it wants.

Polls also show that the American people and even the majority of U.S. senators (90 out of 99) want a defense bill which clearly defines torture and forbids any U.S. operative from torturing prisoners. A few crazies in the administration oppose this, and so the bill has yet to pass. President Bush has even threatened to veto any bill which comes before him banning torture. Just for sake of comparison, President Bush has never vetoed any bill”¦not one. But he promises to veto the banning of torture.

Then you have Pat Robertson”¦and yes, I know he doesn’t have any political power but he does have a lot of kooky followers so I wouldn’t underestimate the power he wields. This week in Dover, Pennsylvania several school board members didn’t get re-elected because they had begun to talk about introducing intelligent design into the school. Parents caught wind of this and during the re-election decided not to send these superstitious simpletons back on the school board where they could do any harm. In other words, they elected folks who have the best interest of the children in their hearts and don’t have some misguided religious mission to Christianize secular education. Good job for them, right? Well, not according to Pat Robertson. Get a load of what he had to say about this: 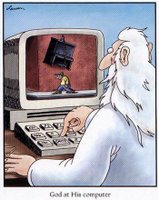 “I’d like to say to the good citizens of Dover: if there is a disaster in your area, don’t turn to God, you just rejected him from your city”¦and don’t wonder why he hasn’t helped you when problems begin, if they begin. I’m not saying they will, but if they do, just remember, you just voted God out of your city. And if that’s the case, don’t ask for his help because he might not be there,”

I think God wants our kids to get a solid education in biology so the rest of the educated world won’t make fun of them. But according to Pat, in the very near future God may very well smite the city of Dover. I guess with fire or something, Pat wasn’t really clear about that, but I’m sure Dover will get clobbered. I assume Pat must have God on speed dial because he sure gets a lot of direct-from-the-throne information.

Look folks, if you need science to validate your faith then you really don’t have faith at all. It’s called faith because it’s not supposed to make any logical sense. The creation stories at the beginning of the Bible are not logical, and neither is the story of a man who rose from the grave and could walk on water. We believe in them because we have faith that they happened, not because we received empirical evidence that the stories are true.

Let science and religion do their respective jobs and quit trying to mix two things which are completely unrelated.

Man”¦I really strayed from my original topic on this one didn’t I? And not one dick or fart joke in the whole post. Whatta waste.