Kevin Smith begins filming the sequel”¦oh wait I’m sorry, follow-up, to Clerks next week. He has promised to film a diary of the production and post two video entries per week; although with his habitual tardiness I wouldn’t hold my breath on that. I think you’ll find the first entry pretty funny.

I’m excited about Clerks 2 in the same way I get excited about eating pizza. It’ll be comfort food for the eyes and ears. I know Dante will bitch about work; Randal will say something inappropriate and sarcastic; Jay will say something wildly homoerotic and then immediately follow it with something homophobic; Silent Bob will wait till the end of the film before speaking and then he’ll say something that sounds intelligent but really isn’t; the credits will roll and I’ll be a happy man.

I better tell you the whole story, humiliating bits and all, before Leigh leaves it in the comment section to embarrass me. Several years ago we flew to Red Bank, New Jersey for a very small film festival that Kevin was holding. The day of the festival we got a late start and were afraid we would miss the beginning of the event. We were meandering down the streets of Red Bank, it was snowing like crazy and the cold weather was throwing this Texas boy off his game. We finally found the correct street and began running toward the theater in the distance. When we got close to the theater I could make out several figures standing in the doorway smoking. Leigh had to yell over the thumping of our foot-falls and the roar of the wind and the snow to tell me one of the guys was Kevin Smith.

I was so excited when we got to the door that I began talking immediately, and while I don’t really remember what I said, Leigh does, and she helps me remember every chance she gets. “Oh, Kevin, it’s so great to meet you”¦I love all your films, and we flew all the way from Texas to meet you. We’re from Texas. We flew here.” And apparently I just kept mentioning flying and Texas. Kevin endured my southern rain man routine, and when I finally shut up he said, “Well thanks”¦why don’t we go in now it’s really cold.”

The other guys that were standing with him? Brian O’Halloran and Jeff Anderson: 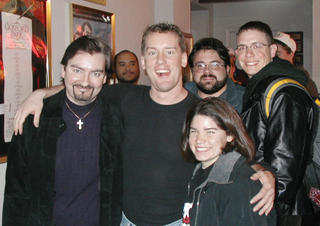 Bryan Singer has also been keeping a video blog during the production of the new Superman movie. I always found Singer as entertaining as his movies, and the video blogs are no exception. His irreverence and sarcasm in them makes me laugh. In some of the entries you’ll hear the John Williams theme song playing quietly in the background. For some reason that score always gives me goosebumps.