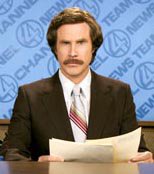 I’m more than a little worried about the state of news in our country. We have entirely too much of it. I’m not even going to pick on the 24-hour news stations because they’re too easy of a target.

The network stations alone broadcast too many news shows. The six A.M. news, the midday show, the five o’clock show, the six o’clock show, then the big one at ten o’clock news, which of course replays at one A.M. just in case you missed it.

First off, nobody needs to be that worried about a) the weather and b) local sports, ok? Give it a rest. Second, if you live in a large city stop obsessing about traffic reports. Traffic sucks. Either get used to it, or move to a one stoplight town. No amount of checking in with the news will clear the seriously overcrowded highways. You’re gonna be in your car for a while. Bring a snack.

The worst thing about the over saturation of news shows comes in the form of the actual news content. They’re on the air so much that news shows know they have to scare the shit out of you with teaser commercials to force you tune in, so they air ambiguous and scary sounding leads like “You feel like drinking eight glasses of water a day helps keep you healthy, but is the water from your faucet killing you? Tune in at ten and we’ll tell you.” And there you are, paralyzed with a glass of water poised an inch from your parched lips at five in the afternoon, wondering how long you have to live.

Tonight on WOAI here in San Antonio the 10 o’clock news devoted a segment to a woman who bought a filing cabinet second hand. When she got the cabinet home she discovered it held some old files containing personal information of job applicants. She called the news station, the news station called the police, and the police came and got the files. Why the hell did that show up on the news? Why do I even know about it? They even posted the stupid time-wasting story on their web site, thereby allocating precious bytes of internet space which could have been used for something good, like a video of someone getting hit in the crotch with a baseball bat, but instead we get their lame-ass story.

We need three news programs, tops. One in the morning for the daily weather and any other important news you may need throughout the day, for instance election reminders, school closings or warnings of nuclear fallout. That should only take fifteen minutes, and they needn’t even allocate a commercial break. 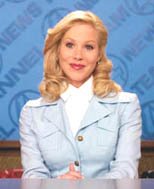 Other than that, keep those smiling jerks with their fake hair and their whitened teeth off my T.V. screen.

Unless the anchor’s Tits McGee. I could listen to her say “thanks for stopping by” all day long.