Sometimes I tag a link for the daily link dump and then realize later that I should dedicate an entire post for the link. A good example comes from a news story off the KNBC4 web site about a woman who pulled a sword on another woman in a Wal-Mart parking lot over a parking space. After I tagged the story to go out tomorrow I kept returning to reread it, and eventually this post was born. 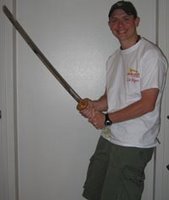 I’m a firm believer that the majority of the gun nuts out there simply suffer from an over inflated sense of machismo, hence the desire to conceal a lethal weapon. However, there is no more macho a weapon than the sword. Phallicly a sword looks way more like a penis than a gun, so that should please a large number of the pro-gun crowd aesthetically and psychologically. Just look how that thing juts out”¦just waiting to penetrate a bad guy.

Also, swords are much more difficult to hide. I know I’d want to carry the biggest sword I could get my hands on;

as I’m sure would most guys. I’d hedge a pretty healthy bet that most guys would opt for the Scottish Claymore, or Great Sword, to carry around. How could they not? Our manhood wouldn’t allow for anything smaller. Thankfully, large swords are pretty easy to spot, unless of course the wielder of the sword sports a large, black trench coat just like the Highlander. Even if the sword handler takes to wearing trenches, in the summer we’d all know to keep our eyes on the dude in the leathers sweating like Ted Kennedy at an AA meeting. And in the winter the weather solves the problem of spotting them for us, because manipulating the hilt with frost-bitten fingers requires a lot more dexterity than squeezing a trigger.

I also think that by forcing attackers to come a little closer to their victim would perhaps make them think twice about committing murder. Think about it: Depending on your aim and your stock of bullets you could stand a block away and kill a whole crowd of people. 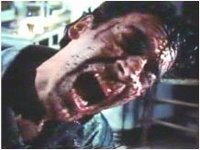 You might not even see any blood from that distance. It’d be just like wasting people in a video game. That all changes with a sword. You gotta get up close and personal to kill someone with a sword. And forget about not seeing any blood. You take a slash or a thrust at someone with a sword and you’re gettin’ blood on your shoes. Probably lots of it, too. That kinda stuff tends to make even the most hardened criminal queasy.

Swords also take training to wield properly, unlike guns. Ever since “Duck Hunt” on the 8-bit Nintendo children have been training to shoot guns. Not so with the sword. You ever hold a sword? You’d notice the weight of the weapon first. They’re pretty heavy. Even the one-handed ones, like rapiers, tire you out pretty quickly. Sword fighting also requires you to be in decent shape. Most people can’t outrun a bullet, but even a moderately healthy person possesses the ability to stay out of sword-range.

So that’s my plan: replace guns with swords. Ideally we’d get the entire world to follow our trail blazing lead, that way even our military wouldn’t need guns anymore.