Let me being this post by stating that I am not a sports fan at all. I have witnessed exactly two professional sports games in my entire life, and both times I went for the sole reason of watching the Beach Boys perform after the game. I just had to hear “409.”

Anyway. As a non-sports fan I’m having trouble understanding all the hoopla about players taking steroids. Sports media and fans have ripped steroid-player du jour Barry Bonds apart lately, and I don’t get it. Why are they bitching? Presumably they loved Bonds when he hit all those homeruns, and now they turn their backs on him when they find out he may have ingested or shot up with bovine steroids?

No one complains when players have LASIK surgery that grants them preternatural vision. How many complaints does the MLB receive annually regarding the misuse of supplements, dieticians and/or over-training? I wonder how many players have undergone surgeries where doctors replaced a natural joint with one made out of unbreakable titanium. I’d call any of those things unfair advantages, but those are all “legal.”

At best sports fans are pretty selective about what they consider to be tainting the so-called “purity” of the game. Players undergo all kinds of things to perform better on the field of competition”¦things that a normal human being wouldn’t have the desire or the physical stamina to endure. I find it more than a little hypocritical that the same folks who are complaining now were cheering for the bat-wielding behemoth a year ago. From the photos I’ve seen Bonds underwent a Bruce Banner to Incredible Hulk-like physical transformation in several months. What did they think happened? That he started eating spinach like Popeye? Just look at the before and after picture for God’s sake: 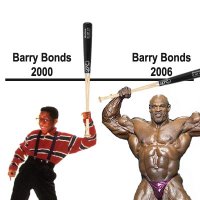 I’ve heard people say that letting these guys take steroids, or any other performance enhancer, pressures other players to do the same, thus placing the whole league in danger. So what? These guys aren’t exactly office temps. I’m pretty sure they knew their jobs came with certain occupational hazards when they signed those highly lucrative deals. Allowing them to shoot up just adds another hazard. 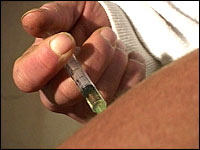 If I knew the players were all juiced up I might actually watch sports. If I was in charge I wouldn’t stop at the juice. I’d let’em get bionic implants like Lee Majors and allow non-penalty fighting in every sport”¦even with the sports equipment used as weapons. Who wouldn’t like to see a steroid-enraged batter chasing the pitcher across the infield with his bat? I’d pay a lot of money if I knew I had a chance of witnessing a shortstop remove his shoe and slap a runner in the face with his cleats.

They should put me in charge; I’d liven up their silly sports games.