I tried to post earlier in the day, but despite the technological sophistication of Starband the cloudy weather prevented me from using the Internet.

Tonight on the Daily Show Jon ran a segment about the RNC’s new web campaign attacking Democrats for their “cowardly” stance regarding the Iraq war. The Republicans don’t really say anything of substance in the piece, and as Jon pointed out many of the sound bites they use from prominent Democrats, including Howard Dean and John Kerry, are manipulated and distorted to sound much more incendiary and anti-American than they actually are…no surprise there. I was surprised that Jon left out the most important aspect of that RNC ad: the photo of the American solider has been photoshopped.

In the ad, it appears as if an American soldier in Iraq has been watching video of Democrats degrading them and the war. You can watch the ad in its entirety here. This is the photo from the ad:

Kind of embarrassing, huh? I mean, here we are taking for granted the fact that we live with the luxury of commenting on a war in which we really have no personal involvement, and we forget that there are real people out there fighting. The RNC ad really emphasizes the damage to morale the Democrats are having on the soldiers.

Unfortunately, that wasn’t actually what that solider was watching…here’s what he was really watching: 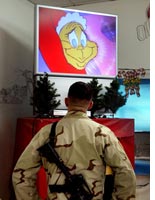 Yeah…the Grinch. Now, I’m not saying the Republicans are the only group of folks who are dishonest enough to manipulate photos or video, but this provides an excellent example of why you should never, never, trust a damn thing you see on the TV or the internet, especially if there was a political party involved with the conception of whatever it is you’re watching. Read more about that ad at Slate. 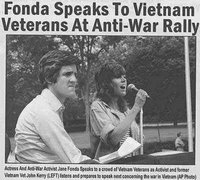 Any jackass can learn to use photoshop. In fact, I’m something of an amateur photoshopper myself.

I’m sure you’re all familiar with my 50 Cent/Mark amalgamation? If my skills in photoshop don’t impress your cynical and jaded sensibilities, you should take a quick look at Worth’s photoshop contests which should convince you with their beauty that anything is possible with digital manipulation. I encourage you to marvel at the talent of photoshoppers, but remain ever vigilant and prepared to decry “bullshit” if a photo looks too deliciously damning to be true.