Well, we missed most of the May Day celebrations, or the ones that didn’t get canceled because of the rain, anyway. I suppose our aversion to the drizzly rain and freezing wind at 5:00 in the morning points to a certain lack of dedication as far as out touristy bravado goes, but frankly I’m not one bit regretful that we stayed in our warm bed. 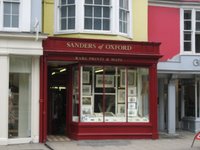 We left our B & B after the sun had come out and the weather looked a bit more civilized. During our shopping we found an 18th century print eulogizing John Milton at “Sanders of Oxford.” The print shows images from “Paradise Lost” around a portrait of Milton, and at the bottom the owner of the original portrait of Milton used in the print discusses how he came across his portrait and he also details his relationship to Milton. I’ll scan an image of it when I get back to San Antonio for anyone who’s interested.

We also took a couple of tours around the campus, one of which took us into the Bodleian Library. The library is an amazing place. Unfortunately, they only allowed us up into the reading room for several minutes, and even then only as far as the foyer and not into the stacks. John Bodley, who lived at the same time as Shakespeare, made the library here at Oxford his life’s work. In 1610 he convinced the Stationers’ Company in London to declare the Bodleian a copyright depository, which means that the library receives a copy of every book published in the U.K. 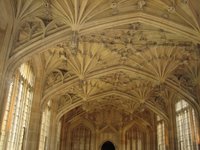 Remarkably, the library has never experienced a catastrophe such as fire or flooding in all its years of existence, so they still hold many amazing manuscripts and first editions, all of which remain in remarkable condition. Many of them still have the metal clasps attached to their covers from a time when the library chained the books to the shelves. The only picture I have to share is of the intricate fan ceiling from the Divinity School, located directly beneath the library. They forbade us from taking pictures in the actual library, and our group was too small to risk even a quick photo.

Tomorrow our trip ends and we fly back into the states. I’ll try to write a wrap-up post on the plane and publish it when we get home.

One thought on “Oxford: Bodleian Library”