Tonight Leigh and I drove up to Bookpeople in Austin and watched Neil Gaiman read from his new book Anansi Boys. We also stayed and got several books autographed. 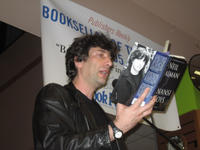 Listening to Neil read from his book was quite an experience. After having heard Neil read I’m quite sure that when I read the book for myself that it won’t be my voice I hear in my head, it will be Neil’s. And that’s perfectly fine with me. His speaking voice animates the characters much better than the voice in my head. After all the reading I’ve been doing for my M.A. exam the voice in my head has pretty much quit trying to impress me. In fact, it’s gotten quite lackluster, and I may have to find myself another one.

During the Q & A portion of the event, an audience member asked Neil about his upcoming movie Mirror Mask, and Neil said that when he started writing it he did so with the intention of writing a family movie. He stopped for a moment, and then said that he thought Americans had different ideas about what a family movie was when compared to the British. In Neil’s opinion Americans tend to think of a family movie as “one where you can leave a three year old watching for several hours and by the end of it they won’t have had any ideas.” I thought it was a pretty good description of the mindless crap parents tend to use in lieu of a babysitter. Fortunately, Mirror Mask looks to be nothing of the sort. Watch the trailer if you don’t believe me.

Any time we go to events like this, ones in which writers speak about writing, I always feel guilty about not trying harder with my own work. Sometimes I think the academic route I’ve decided to take may in fact be a dodge of some sort. I’m able to remain close to, and comment on literature, but I’m never actually put in the position of the one being critiqued.

There’s never really any chance of people disliking what I’ve written as long as it stays on the hard drive. Unfortunately, there is also very little chance of me ever getting published either.

Anyway, here’s a picture of Leigh and I getting our books signed (click to enlarge). See that piece of paper in Neil’s hand? That’s the URL for this blog. God, what a whore I am. 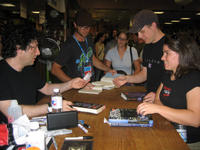 And for those interested, Neil’s a prodigious blogger. Head over there sometime and check out his blog.