I don’t know about you, but I am sick to death of the Bush Administration’s attempt to justify any and all illicit behavior by means of the “terrorist” defense. Look, let’s just lay our cards on the table, all right? We all want to protect our country, but we simply cannot afford to dismiss our constitutional rights as quaint colonial musings to do so. Let’s scrutinize the current debate about wiretapping, and then do a little hypothetical comparison afterwards.

Right now we’re being told that we need not worry about the intrusions into our privacy by way of electronic eavesdropping because the NSA is merely monitoring for terrorists. 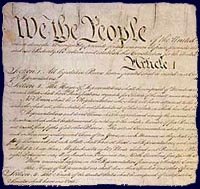 Okay, now keeping that in mind let’s refresh ourselves on what the Fourth Amendment to the Constitution states: “The right of the people to be secure in their persons, houses, papers, and effects, against unreasonable searches and seizures, shall not be violated, and no Warrants shall issue, but upon probable cause, supported by Oath or affirmation, and particularly describing the place to be searched, and the persons or things to be seized.”

Well gee-willakers! Contrary to what Bush says it looks like warrant-less wiretapping is illegal. Dammit. Well, maybe it’s okay since we’re battling terrorism, huh? ”˜Course, if that were true the amendment would probably make a provision for it. Umm, well, maybe it’s in a gray area. I mean, if it’s in a gray area then at least this only infringes on our rights a little bit. It would be bad if the wiretapping thing broke another law.

So not only has the administration violated and infringed upon the rights granted to us by the Fourth Amendment, they also placed the telecom companies, which so graciously and patriotically complied with the NSA’s demands, in a very actionable position. The telecoms illegally turned over private information to a government entity, and by doing so broke the law. Oops.

Of course, if you follow the news you’ve heard all of this ad nauseam. Yesterday USAToday revealed that in spite of Bush’s assurances to the contrary, the NSA has in fact been spying on domestic communications on a massive scale. Bush promptly responded by saying, yeah, okay you caught us. We do spy on domestic calls but we don’t really listen to what’s said. We just make notes on who you’re calling, and really, only criminals would get upset over that. Besides, we gotta fight terrorism, so don’t give us any lip.

Does my paraphrasing reveal bias? Damn. Sorry ”˜bout that. And people make fun of the line “but I didn’t inhale.”

Opponents claim that the administration’s actions are illegal and unconstitutional. Proponents claim that we need to fight terrorism, rights be dammed, and besides, only hippie commies bitch about “privacy,” because as we all know God-fearing Christians have nothing to hide.

Which very well may be true. Most of the time God-fearing Christians lead excruciatingly boring lives, so perhaps they really don’t have anything to hide. But mull this over Reverend Billy Bob: 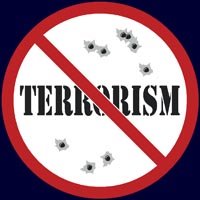 What would you say if the administration suddenly claimed that it’s too dangerous to have all these guns floating around? That because terrorists could go to any gun show, pawn shop, or Wal-Mart and buy loads of weapons to use to kill Americans that we now need to register every ballistic weapon we own with the government, whether it be a deer rifle or a pellet gun or an AK-47 or a sling-shot. Ooo, that’d kinda suck, huh? Then you later found out that in addition to the compulsory registration retailers had covertly supplied the government with not only your name and your gun purchase, but your address, phone number, eye color, fingerprints, and bullet purchases.

That’s a little different huh? Not so hippie-ish now, right? We’re all in this together and we should all protect our constitutional rights against anyone who would take them away. I hate to admit this, but in the 2000 election I voted against Al Gore for one very simple reason: During the eighties he and his wife aggressively called for the censorship of musicians. Infringement of the First doesn’t fly with me, and neither does infringement of the second, third, fourth, or any of the amendments. Well, that’s not true. I’m not a big fan of the sixteenth, and the eighteenth really sucked, but everyday I thank God for the twenty-second.

But don’t worry about me. I’m not overly concerned about any of this. I know that Bush will get what he wants. Shit, he better”¦he controls all three branches just like Palpatine. I get my shots in when I can. When I’m on the phone I like to randomly sprinkle terms like “dirty bomb,” “The Big Osama,” “Anthrax,” and “I kill people” throughout my conversations. I’ve also embedded search tags on this page so that anytime someone searches for “how to make bombs” this page turns up.

Hey, I got nothin’ better to do, and I’ve always been one to poke a stick in the eye of authority whether they needed it or not. And like James Madison once said, “You gotta fight for your right to party.”

9 thoughts on “My Privates”