I’ve been sitting here for several minutes trying to come up with something satirical and humorous to write about a federal grant opportunity I found on-line, but my revulsion over the implications of the grant are stifling any comedic re-writing.

So, what is it you ask? Well, the USAID “is seeking applications for an Assistance Agreement from qualified sources to design and implement a social and economic stabilization program impacting ten Strategic Cities, identified by the United States Government as critical to the defeat of the Insurgency in Iraq.”

Yeah”¦we had a plan for victory before we went into Iraq. We’re just posting job opportunities like this for the hell of it. Arrrrrrrrgggggghhhhhh! This makes me want to bite someone on the face!

Deep breath, count to ten, finding my center, going to my happy place, imagining a tricycle-riding midget holding mugs of beer”¦Ok, I think I’m better. I think I can proceed with the jackassery now:

I have formulated a very simple plan that could be implemented incrementally in three steps which I believe assures our success:

1. iPods for Guns. Every insurgent who brings in a gun gets an iPod. Bring in two guns you get two iPods, but before we give the iPod’s to the insurgents we make sure they’re loaded down with 80’s hip-hop songs. What insurgent would have the time or the desire to kill Americans while doin’ the Hump and pumpin’ up the jam? Get your booty on the floor tonight, indeed.

2. Fire Rumsfeld hire Dr. Phil. This one’s pretty self-explanatory. We can send Phil over there and he’ll starting issuing blame in the appropriate places and putting his big, sausage-like finger his people’s faces and before long we’ll all be hugging and eating Barbeque. If you think this is far-fetched just remember: Karen Hughes is the undersecretary of state for public diplomacy with the rank of ambassador”¦so placing a colloquially speaking, one-language-knowin’, hick-sounding Texan in charge of middle-eastern diplomacy isn’t a radical idea-it’s simply maintaining the status quo. 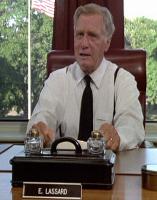 3. By this point the iPods will have crippled the insurgency, and Phil will have sorted out the ner’do-wells in the government, so all we have to do is find a man capable enough to train the Iraqi military. Only one person has the capabilities to train the rag-tag group of men who will eventually comprise the Iraqi army: Commandant Eric Lassard. If he can deal with the shenanigans of Mahoney, the rigidness of Harris, the booby-ness of Callahan, the rage of Hooks, and the hilarious sounds that emanate from Jones, then I think he’ll do a very, very, very, very, very, good job in Iraq. Cue the music.

After Lassard trains the Iraqi army and the new Iraqi officers save their country from ninjas (I thought Police Academy 4 was really good, so back off) we can go home, and proudly proclaim from the decks of our victorious battleships “Mission Accomplished!” 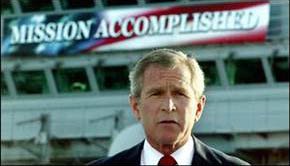 UPDATE: I also noticed that on the USAID website they use the initials “SCSI” to shorten “Strategic City Stabilization Initiative.” In the nerd-world this also stands for “Small Computer System Interface.” Ironically, Nerds often pronounce this as “scuzzy” which I find exceedingly appropriate in the USAID case.