When I was in seventh grade the administration of my school decided that all of the classrooms on campus needed to have intercoms installed in them. For several days there were electricians in our classroom, tearing up the walls, wiring things up, and generally assuring that the students were so distracted that they learned absolutely nothing. On the first day the workers were there I stole a bunch of wiring a foolish worker had just left lying around. Why? Well, because I was kind of a hoodlum (sorry mom).

Anyway, after I took this big bunch of wiring (it was really in the trash, I promise) I had no idea what to do with it. After much deliberation I decided to make a cap out of it, because really, that was the obvious choice. So, for the next several days when I was supposed to be paying attention to math lessons, I was covertly trying to bend wire into the shape of a hat (which pretty much explains why I cannot divide or multiply correctly).

After days of intensive craftsmanship and several failing quiz grades later, a true masterpiece emerged. And how did you guess”¦I still have it. Behold: 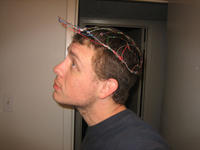 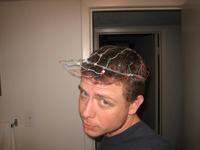 Click to enlarge the gnarly-goodness that is my hat.

Why on earth am I sharing this with the various and sundry denizens of the net? Well, up until several minutes ago I was rightfully under the assumption that I was the owner of the sweetest cap on the planet. That is until I saw this guys cap. Now, I humbly step aside and take the number two spot.