I Am The Blogging Tsar

I poked fun at the ridiculous self-photos of MySpace users several posts ago, but for those who haven’t heard of it, MySpace is basically blogging lite. If you begin removing everything about blogging that makes it interesting eventually you’ll have MySpace. The Daily Show recently broadcast a brilliant piece about MySpace. Watch it here. 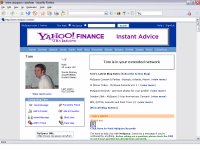 MySpace allows individuals to create a page which they use to advertise nothing but themselves. The creators of MySpace initially created the project as a way for unsigned bands to advertise and distribute samples of their music, but somewhere along the way the tweeny crowd high-jacked it, and now MySpace advertises people. And young people at that. The creator of an individual page attempts to make their page visually attractive and alluring because the goal of MySpace is to see how many people add you as their “friends.” An individual can have thousands of “friends,” which occasionally post vacuous comments on their page. If you haven’t eaten in several hours, go to MySpace, and on their home page they always list “Cool New People.” Click one of those and prepare to become depressed about the state of youth in the States.

What happens from there? Nothing. Your page sits there and you see how many “friends” you make, and sometimes you chat with them online, and if you’re a girl you spend 98 percent of your time warding off pedophiles and sex offenders.

The pedophile thing was the impetus behind Murdoch’s announcement of a “Safety Czar.” Recently several news stores revealed MySpace as a smorgasbord for kiddie-fiddlers (just google myspace and pedophilia). Also, tweens are using MySpace as a way to advertise their promiscuity and willingness to have no-strings sex. Oftentimes many kids from the same High School frequent the MySpace pages of classmates as a kind of classifieds for sex.

First off, why do we have to call the head of every institution a “Czar.” We have a “Drug Czar” a “Terrorism Czar,” and I’m not entirely comfortable that we willingly naming governmental officials or otherwise a word synonymous with “Emperor”. I don’t think we’d be as complacent about it if Bush appointed a “Drug Dictator,” or NBC announced the appointment of a “Decency Overlord,” or the FAA selected a candidate for the role of “Aviation Fuhrer.”

Also, the article I read stated that “Although her daughter’s profile was an innocent listing of her interests and friends, Mrs. Couvertier says she was shocked by the other risquÃ© profiles and photographs. Says her husband, Augustine: “It’s just a sexually charged atmosphere that is inappropriate for young kids.”

Really? A “sexually charged atmosphere that is inappropriate for kids?” No wonder parents and school administrators are mad. MySpace shanghaied the role of High School lunchtime and church socials as the places where kids pretend to be adults and willingly give away their innocence. Damn you MySpace!!!