Yesterday we walked all over central Athens. We went shopping, drank a few Nescafes, bought some souvenirs and spent the day quite leisurely. Athens is a strange place. From an archeological and historical viewpoint it’s one of the birthplaces of modern civilization. The ancient Greeks developed an organized society, they invented Democracy, they valued art and literature, and contemporary academics still utilize much of the philosophy from that period of time. Modern Greece is much different than that long gone idyllic place. You’ll find no Socrates or Plato here. 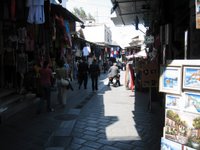 Street vendors sell knick-knacky shit on every corner. For some reason magnets are the big thing and the “salesmen” walk in front of you throwing them up and down. They practically force you to push them out of the way”¦which we’ve done”¦several times. Restaurant employees stand in the middle of the road with menus and follow you down the sidewalk in an attempt to lure you into their restaurant. Graffiti adorns every building (actually some of it’s pretty good). It’s hard to remember the illustrious past of this country with the dog and pony show in full swing. 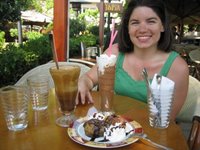 The only sensible thing to do is to find a cafÃ© in the shade, order a few drinks and maybe a dessert, settle into your seat and watch the freakshow. There’s no admission cost unless you want a few magnets.

Let me also say this: Frommer’s lies. Constantly. Since arriving in Europe we’ve relied heavily on the Frommer’s Guide Books. The one for London and the one for Italy were quite well done. We found a few mistakes, but hey, nobody’s perfect. But the one for Greece stinks. First off they don’t list the names of places they recommend in Greek, which is a problem. Some establishments post a transliteration of their name underneath the Greek, but many don’t and we spend half our time trying to figure out the location of the restaurant we read about. We usually rely on the street addresses, but again, sometimes those are difficult to find.

Then last night we went to a restaurant that the book highly recommended. They must’ve been drunk when they wrote the review. They stated the staff spoke English and were quite helpful. What an overstatement. The guy who seated us spoke English, but our waiter did not. Or I’m assuming he didn’t. 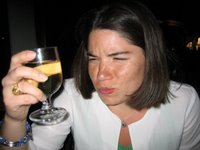 He could’ve just been an asshole and didn’t feel like dealing with Americans. He pretty much told you what you were to order, and God help you if you asked for a few moments to decide. By his reaction you’d have thought we were in France. We asked him for a carfare of wine, but instead he brought us rubbing alcohol. Oh, he said it was wine when I asked him, but I know rubbing alcohol when I see it. See Leigh’s face? That’s what happened with every drink. That stuff could’ve removed paint. 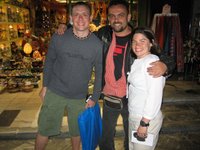 Then on the way home we encounter this chucklehead. Now, I’m a pretty cynical and hardened fellow. I don’t easily fall for cons or sales-pitches, and I’m lightening-quick about telling pushy jackasses “I SAID NO.” But this guy got me. 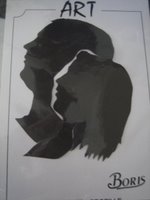 He jumped in front of us and started cutting a piece of paper with scissors. We tried to walk off”¦he said “wait, just wait.” We watched as he proceeded to cut our silhouettes out of the pieces of paper. When he finished he looked at me and said “five euro” and I realized I’d been conned, but dammit if that wasn’t the most inventive con I’d ever seen.

So now we own five euro worth of paper in the shapes of our heads. Hooray.

One thought on “Greece: Flimflam and Silhouettes”