As a fan of both “high” and “low” culture I find literary and academic snobbery which completely dismisses popular culture appalling, and through this blog I have always striven to bridge and mingle all forms of culture. Comic books represent an area in which I’ve particularly invested myself in legitimizing, especially to the literati who automatically thumb their nose at any work not included in a Norton Anthology.

Since the movie “V for Vendetta” opens in theaters on March 17th, I thought now would be a good time to write a post about the absolutely amazing graphic novel from which the movie is based. Alan Moore, the writer of several seminal comic works including “Watchmen,” “League of Extraordinary Gentleman,” and “From Hell,” and David Lloyd began working on what would become “V for Vendetta” in 1982 for Warrior magazine in England. Because of the cancellation of Warrior in 1985 Alan Moore and David Lloyd were left unable to finish “V” until 1988 when DC comics acquired the rights for “V” and commissioned Moore and Lloyd to finish the series. 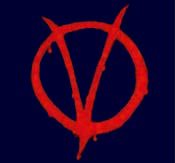 Through his writing Moore has continually crafted stories with mature themes that challenge the reader on many different levels. “V for Vendetta” is no different. Partially written as a reaction to Thatcherism, Moore drew from many different texts to craft the protagonist “V.” In Moore’s article “Behind the Painted Smile” he states that “One night, in desperation, I made a long list of concepts that I wanted to reflect in V.” Among those concepts are George Orwell, Aldus Huxley, The Shadow, Batman, Fahrenheit 451, Thomas Pynchon, Robin Hood, and The atmosphere of British Second World War films, etc.

“V” takes place in a dystopian London several years in the future. A fascist government keeps the citizens of London complacent and provides them with the illusion of security, all the while denying them liberty and freedom. When the comic opens and we are first introduced to the character V he seems only concerned with seeking vengeance for crimes committed against him by the English government, but as the series progress through its three distinctive parts we slowly begin to realize that V’s decision to conceal his identity behind the mask of Guy Fawkes points to something greater than merely a quest for vengeance. Through the series the man behind the mask becomes less and less important than the symbol for which he stands.

You won’t always agree with V. In fact, the very thing that makes V so damn good is the complexity behind the protagonist; many times V will disgust you. His complete and total investment in the liberation of England completely precludes any chance for a reader to see the character as an actual human being because he becomes inhuman in his cold and calculating behavior.

The power behind “V for Vendetta” resides in Moore’s willingness to start small in subject matter and philosophy. He allows the story to progress in complexity until it reaches a crescendo so large and multi-layered that you’re forced to reread the whole thing immediately upon finishing it.

And if you think I’m overstating the case for a piece of “junk” literature then prove me wrong, my friend. I’ll be happy to hear from you.