I’m sure you’ve heard about Al Gore’s movie “An Inconvenient Truth?” If not, it’s a documentary about the impact of global warming on our environment. Recently the Associated Press contacted 100 scientists and asked them their opinion on the film and they overwhelmingly agreed that Gore did a very good job presenting the scientific facts of global warming.

Of course, a small number of scientists disagree with Gore on this issue, but since those dissenters seem to regularly receive checks from Exxon/Mobil I’m not sure how much credence I’d lend their claim that Gore’s film is simply global alarmism. They remind me of the one out of five dentists who don’t recommend brushing regularly.

I hope we’re finally coming to the point where the desire to combat global warming transcends political affiliation and simply becomes a collective movement for the betterment of human kind. I’m sure it won’t happen in this administration but maybe the next one, whether it be republican or democrat, will lead the world by example in battling global warming. 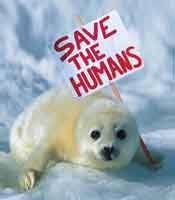 Don’t misunderstand me: I’m not one of those nitwits who believe we possess the capability to destroy the Earth. “Save the Earth.” What a dumbass non-philosophy. It should have been “Save the Humans,” ”˜cause isn’t that what we’re really talking about? The Earth will pretty much adapt to whatever conditions occur, but the people? I’m not saying we’ll become extinct; I think we’re much too resilient and intelligent for that. But I certainly don’t want my great-grandkids worrying about where they’ll get the money to buy the new Hilfiger Haz-Mat suit.

As much as my intellectual side hopes we’re experiencing a paradigm shift in the way that we view global warming the sci-fi nerd in me hopes we’ve reached the point of no return.

Just in case a swift and violent environmental disaster occurs, here are my tips for survival in the wasteland: 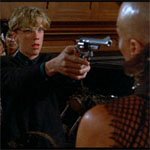 1. Find a shotgun. Unless you’re a trained marksman (or a high school nerd) handguns will only get you into trouble. Inevitably you’ll pull out your hand-cannon on a group of marauding mutants, take a shot at the leader, miss, and then get mocked while they rape and pillage you. With a shotgun you don’t even have to aim. Just point in general vicinity of the mutants and pull the trigger and the buck-shot will do the rest. Just ask Harry Whittington.

2. As Hurricane Katrina and “Waterworld” taught us, an abundance of water does not necessarily equal an abundance of potable water. You’ll need some means by which to re-hydrate yourself while battling the anarchists and nihilists, and I’m sorry, but beer will not do (it actually dehydrates you). You can find a lot of ways on-line for rendering rainwater drinkable, but that’s so pedestrian, and besides, there’s simply an easier way. Click the arrow in the middle of the picture to the right and Tyler Durden will explain it to you: 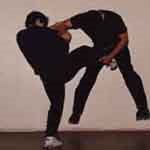 3. Get in shape. Right now. Don’t wait for a tribe of cannibals to begin chasing you to decide that your jogging-stamina needs work. If at all possible hire a physical trainer to chase you around with a shiv while screaming incoherently, because there’s nothing like real-world situations to heighten the immediacy of your work-out. Also, learn to kick people in the groin and to punch at the neck. Use the adam’s apple as a target. And for God’s sake don’t forget about eye-gouging. Too many people underestimate the effectiveness of a thumb in the eye-socket. Just remember: if they can’t see you they can’t invade your orifices.

4. Learn to manipulate and organize masses of people into doing your bidding whether it benefits them or not. I’d recommend watching hours of Pat Robertson and Jerry Falwell. If you can find tapes of David Koresh and Charles Manson those are decent as well. (Yes, I did compare Falwell and Robertson to Manson and Koresh. The only difference between them is that Falwell and Robertson are a smidge more refined). You’ll need large groups of folks to sacrifice themselves for the greater good, i.e. you. It’s not necessary that you convince them to ingest a cocktail of grape Flavor-Aide with a splash of cyanide and a twist of valium, but it’s good to know they would if you asked. Remember: You catch more flies with honey than with vinegar, but you can always lace the honey with narcotics if the flies piss you off.

And that’s it. In the spirit of full disclosure I should tell you that there are more things I’ve written down that I’m just not all that willing to share. I mean, I’ve gotta have some way to get the upper hand on everyone once the hurricanes attack and destroy our freedoms.

3 thoughts on “Global Warming? Sounds Like Fun To Me!”