Delphi: The Oracle and Olive Stains 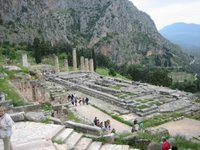 Today we visited the Temple of Apollo and the ancient monuments at Delphi. The modern day Delphi has only been in existence since the 19th century, when interest in the ruins of ancient Delphi began to increase in the archeological community. Russia, America, and France all expressed a desire to excavate the site, but in the end the Greek government chose France. They uncovered a sizable city on the steep mountainous slopes, and cataloged and preserved countless artifacts from not just Greece, but all over the world.

You see, ancient Delphi was the home of the Temple of Apollo, which contained the most famous of all Oracles. Peoples from all over the world came here via the Mediterranean Sea, through the Ionian Sea and into the Corinthian Gulf to offer gifts to Apollo and consult his Oracle. 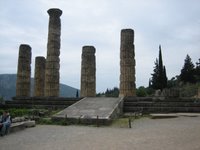 An oracle was a prophecy handed down by a god, sometimes as themselves and sometimes through an intermediary priestess, called a Pythia. The predictions, which Apollo related to the mortal either aurally or written on a parchment, were always rather ambiguous and mysterious. The Delphic Oracle was particularly well known, and you find references to it in just about all western literature. I’m sure you remember the gist of the play “Oedipus Rex,” don’t you? Oedipus, the man who unknowingly killed his father and married his mother, and after discovering his terrible trespass blinds himself? The Oracle plays a pretty big part in the play.

Since Apollo was the god of the arts and leader of the Muses you find references to Delphi, Apollo, and the Muses in just about every canonical work of literature. Even Christian poets invoke the muses and reference this place. It sort of lends your work a little gravitas. After wandering around the site of ancient Delphi and the Temple of Apollo I understand why. 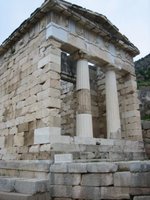 Even now, with the Temple in ruins, the place is beautiful and inspirational. The ruins reside on the side of a mountain, so if you look up you see more ruins and if you look down you see the valley floor way down below. Besides the Temple of Apollo you can see the Treasury of the Athenians (on the left) and the large Theater, both of which remain in good condition. 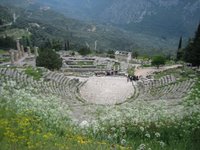 I can only imagine the reverence pilgrims to the Oracle felt as they trekked along the road dubbed “The Sacred Way” up to the Temple, past all the other awe-inspiring stone structures. It must have been grand. Unlike most ancient sites ornery zealots did not destroy this one- Mother Nature did. Rock slides and earth quakes eventually completely destroyed it, but fortunately the numerous references to the Temple in literature make reassembling it via drawing fairly accurate.

Sadly, they no longer allow you to walk through the actual Temple. Too many visitors wanted to achieve immortality by gouging their name in the ancient stone pillars, just like Lord Byron who did so when he visited here. 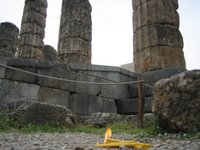 Six enormous columns are all that remains of the Temple. It’s still an impressive sight, and as I said before, and now I understand why so many authors and poets make reference to the Delphic Oracle. And while no Priestess exists to hand out prophecies some people still believe this place holds mystical qualities. We watched as one person lit a handful of candles, said a prayer, and gently laid them on the ground in what I assume was a form of sacrifice or an act of spiritual reverence.

If you ever visit here the crowds might annoy you a little bit. They sure did us. But solutions do exist. Off of the main path you’ll see many little side paths that look infrequently used. Take them. Wander off and very quickly you’ll find yourself out of earshot of the tour groups and school children, and you can enjoy nature all around you and still see the ruins. 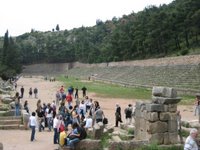 At the very top of the ancient city of Delphi you find an enormous stadium where the Pythian Games were once held. Every four years in the third year of the Olympiads they held an eight day festival comprised of music and physical contests all dedicated to Apollo. The stadium in which this festival was held still exists in relatively good condition. We strolled around the stadium for quite a while, and during the time we were there groups of guys would spontaneously organize footraces and sprint across the stadium. Onlookers would whoop and yell. That happened several times with completely different groups of people who couldn’t have seen the last group race. It made me wonder if they did that just to see what it was like to run there, or if something intrinsic to the place remains which demands contests of physicality. Probably the former”¦but I like to imagine it’s the latter. 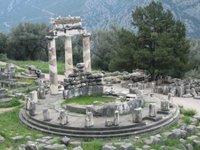 We also visited the Temple of Athena, which sits a good ways down the mountain from the Temple of Apollo. Not much of Athena’s Temple remains either, but it’s still a really neat place. 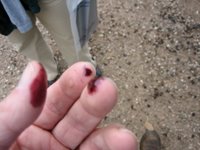 Not many tourists attempt the climb down the steep hill to the Temple of Athena, so you have the opportunity to truly enjoy your time at an ancient site without all the hoopla of the touristy crowds. Also, you’re surrounded by olive trees, which is kinda neat. I’d never seen an actual olive tree before, and let me tell you that fresh olives are a lot juicer than the canned ones. Don’t squeeze one of the dammed things because it’ll squirt all over you and stain up your fingers (and your pull-over hoodie). You’ve been warned.

It’s so beautiful here I could probably write pages and pages about Delphi. We saw a herd of mountain goats on the walk back to the hotel after visiting the ruins. 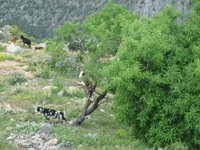 We heard what sounded like pots and pans clanging together and we couldn’t figure out what we were hearing. We looked over the stone wall down the mountain to our left, and to our amusement saw a huge heard of goats clomping along. Large tin bells attached around their necks with burly rope accounted for the cacophony of clanging we had heard. We stood on the sidewalk and watched them as they passed. They ate bits of grass off the ground and leaves out of trees as they went.

Tomorrow we take a train back to Athens, where we catch a plane headed for London. We’ll spend one night in London and then catch a train (again with the trains) to Oxford. We’ll be there for May Day when large numbers of naked Oxford students run into the freezing river at the university. Apparently it’s tradition. Or just an excuse to run around naked. Whatever. We’ll take plenty of photos”¦just don’t expect to see us in any of them.

One thought on “Delphi: The Oracle and Olive Stains”