After several delays and an extremely turbulent plane ride, we finally arrived back in DFW around 2:45 this morning. We actually sat in the plane at the terminal in Las Vegas for roughly an hour before maintenance repaired a “minor electrical problem,” which prohibited our departure. The wait wouldn’t have been so bad had the power in the plane been available to operate the air conditioner, but as it worked out we sat in the stuffy and very hot plane waiting in the claustrophobic heat while they repaired whatever wasn’t working properly. 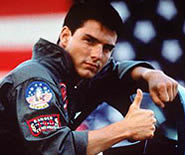 On take-off Maverick dropped the hammer and we roared down the runway so fast and hard I just knew I was gonna get whiplash. Normally a plane will gently lift off the runway and begin a steep but comfortable climb into the air, but last night we shot off the tarmac like there were Migs in the air that we needed to shoot down. Once we got into the air and up to cruising altitude the pilot notified us that air traffic control had informed him that all available airstreams were “slightly bumpy.” Bumpy my ass”¦it was like driving a car on top of train tracks, and for some reason the turbulence always increases ten-fold whenever I get into the little-bitty bathroom and start peeing. I’m not the best air-passenger in the first place, but when we landed I was an absolute mess.

The pilot did display a considerable amount of intelligence in not opening the cockpit door to wish us well, as I would have happily strangled him in front of everyone. As it happened I was only afforded the opportunity to scowl at the flight attendant when she said “Have a good morning” in that fake, sing-songy voice all flight attendants possess.

I do want to thank everyone for sticking around through my week-long blog absence. I’ve got more pictures from Vegas I’ll share as soon as we get down to S.A. and I can get them off my camera, but don’t expect anything too salacious. In McCarran airport TSA actually sat us down and put us in the machine from Total Recall so what happened in Vegas quite literally stayed in Vegas. Unfortunately for me the flight home took place after the memory wipe so I’ll be able to enjoy that memory over and over again.