You know, planning on writing a review on a day when we’re expecting company was probably a bit presumptuous. I’m going to bed. Here’s the short, short version of my review: 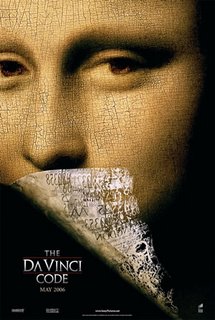 Tom Hanks: terrific actor who probably put waaaaay too much thought into the Robert Langdon character. Langdon’s barely two dimensional on the page, and I’m sure the lack of character development threw Tom into a headpin, the result of which is that he seems very restrained at times and then all of a sudden VERY MANIC!

Audrey Tautou: who? Yeah”¦there’s a reason why you don’t know her. If there’s a God we’ll never hear from her again.

Ian McKellen: I love McKellen. He’s got such presence, and he brings more life to his little bit of Deus Ex Machina (you’ll understand later) than I’d expected possible.

The Script: Hmmm, this is a toughie. I thought the book was a decent thriller, but all the religious stuff never seemed that revelatory to me. Maybe I just read too much conspiracy literature. Anyway, Brown’s got a penchant for exposition and contrivances, and unfortunately those prosaic qualities translate even less well on-screen than in print. In other words, characters spend a lot of time telling you what’s going on in case you’re too dumb to figure it out from the action. Or maybe the writer didn’t have the skill to develop the script without it”¦either way; you spend a lot of time thinking “I get it”¦move on.”

So there’s my short, short version. Hopefully, I’ll post a longer one by the end of the weekend, but if I don’t, well, cut me some slack. My wife graduates from med school tomorrow, so I might be a little preoccupied.

One thought on “Da Vinci Review: The Short, Short Version”