Coming Of Age Is Hard Work

There are certain genres of story-telling that we’re all familiar with whether we realize it or not. Since the time of the Restoration in England when the novel took precedence over most other forms of writing the bildungsroman emerged as a very popular genre of story-telling; it remains as such today. Bildungsroman is simply a fancy-schmancy lit term for a coming-of-age story; in German it means “novel of formation” or “novel of education.” Usually the protagonist of the novel begins as a naÃ¯ve ignoramus and through the trials and tribulations of life eventually grows into a mature adult to realize their place in the world. You’ve seen this framework in such works as “Moll Flanders,” “Citizen Kane,” “Billy Madison” and countless others.

Why did I just go into all that? Well, because I just read this article from Time.com about the Dixie Chicks and realized that they are a real-life embodiment of a Kunstlerroman. 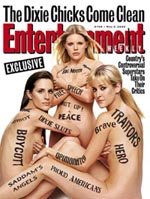 Now, quite honestly I previously held very little respect for the Dixie Chicks. And not because of their comments in London about the president. I liked them for that. No, I disliked them because they apologized for their little comments. By apologizing I felt they lacked the courage of their convictions”¦in other words they wussed out. Hell, all they said was that they were embarrassed that the President was from Texas. Ignoring the fact that the president is a Texan in the same way that Hillary Clinton is a New Yorker, if they felt like that, then good for them. Say it, yell it, and scratch it on bathroom walls for all I care.

But to take it back after incurring the wrath of angry republicans made me even more nauseous than their music. If you’re gonna mouth off then make sure to have the stones to stand by what you say. I mean, just look at Ann Coulter. Sure, she’s more racist and xenophobic than Hilter (GOODWINED) but at the very least she remains consistent in her statements. 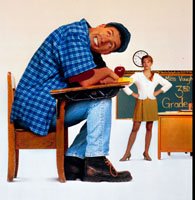 After reading that Time article it hit me: They are actually living a Kunstlerroman. In every coming-of-age story you always see a section where the protagonist compromises his/her morals in spite of every bit of intuition instructing otherwise. Very often this conflict represents the very crux of the story. Take “Billy Madison” for example. Billy decides to endure the hardship of retaking all twelve years of school in just twenty-four weeks. After Eric blackmails Principal Anderson into kicking Billy out of school, Billy gives up and begins drinking margaritas and hanging out with the penguin again, despite the fact that he knows deep down that he really does want the company. Then Veronica comes and beats the shit out of Billy in the pool and Billy decides to hold the academic decathlon, and ultimately save the day.

After they spoke out against the president the Chicks were just like the drunken Billy floating around in that pool: the fear of realizing their potentiality, personally and artistically,

caused them to recoil and compromise their integrity. They apologized and Billy chugged margaritas. But then, just like Billy in his decision to compete against Eric in the academic decathlon, the Chicks stepped up to the plate and consciously fulfilled their artistic destiny just like a good group of protagonists in a Kunstlerroman. They recorded an album of songs they wrote, one of which directly addresses their feelings about the whole incident.

”˜Course, they may have decided that the polls indicate a shift in public perception, hence an anti-Bush song would equal massive sales. If that’s the case then I think they’re in for a huge disappointment. At this point even if the republicans who turned against them dislike Bush’s performance as much as everyone else, the one thing everyone hates is an “I-told-you-so” by a bunch of sanctimonious rich people.

If you’re interested you can go to YouTube and watch the Dixie Chicks video for the song “Not Ready To Make Nice.” If you’re like me then you’ll need to go apply some hydrocortisone cream to the rash you developed while listening to a country music song.

Incidentally, why not watch three videos of good anti-war songs while you’re at it?