Are You Ready For Some Football?!? Why No, But Thanks For Asking.

It really stinks being a guy who hates football during Super Bowl season. People are constantly asking me what I think about the game, what team I like, what Super Bowl party I’m going to, etc. etc. And when I finally get them to shut up for long enough to explain that I don’t watch sports I normally get a look which seems to convey that suddenly I’ve become less of a person in their eyes. Specifically, less of a man. 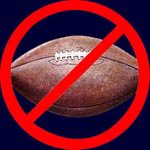 “Didn’t you play football in High School?” No, no I didn’t. “You’re big enough, why didn’t you play?” Just didn’t want to. “Why not?” Look, you really don’t want to hear my opinions on organized sports in High School and organized sports in general. You just want me to tell the tale of some emasculating event, one which you’ve imagined for me, so you can pity me. Well, you can forget that Dr. Phil, ”˜cause I don’t have to justify myself to you or anybody. And besides that you can take that football and cram it”¦

AHEM. Well. Someone needs to switch to decaf, huh?

So what if I’d rather read a book or make home-made bread instead of play or watch football? I like physical activities, just none which are played in a stadium or a field or any place where illegal immigrants sell ten dollar hot dogs and twelve dollar beer.

Actually, I think the food and the beer are the main reasons why some of these middle-aged fat guys like football. They use the “well, it’s just a guy thing” as a reason to sit on their bloated behinds and eat crappy food and curse and fart. Well I got news for all you Neanderthals; you don’t need football to do any of those things, much less the last two.

One thought on “Are You Ready For Some Football?!? Why No, But Thanks For Asking.”