An Act of Faith

I’m sure most people are familiar with Abraham. Christianity, Judaism, and Islam all hold him in very high regard. He is often identified with having had unwavering faith in God, so much so that he very nearly willingly sacrificed his son Isaac (or Ishmael if you’re Islamic) to Yahweh in Genesis 17.

Most people I’ve listened to believe this illustrates Abraham’s great faith in God, and should serve as an exemplar of faith that we should all strive to achieve. Well, I agree that Abraham proved his unwavering faith, but not by nearly murdering his son.

Now, I’m not gonna deny that Abraham’s willingness to sacrifice his son proves him a faithful servant, 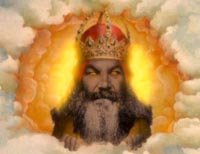 but really, in light of all the other kooky gods floating around in Abraham’s time this hardly seems like an outrageous request. Spiteful and mean maybe, but unheard of? I doubt it. The Egyptian deities were particularly mean and vengeful, and guys like Dagon and Jupiter weren’t exactly a barrel full of laughs. They all tortured and maimed their worshippers, sometimes even intentionally, and requesting them to kill pretty much happened all the time. So I’m sure Abraham had heard tales of gods instructing their followers to kill people. Maybe not their offspring but kill nonetheless. 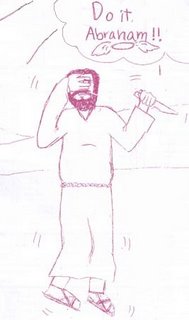 So the whole “God told me to sacrifice my son” thing doesn’t impress me much. Sorry.

But God did get Abraham to cut his own pee-pee, and that my friend proves his faith.

Think about it. That whole circumcision thing must’ve taken Abraham completely by surprise. Whoever heard of a god telling someone to shave the skin off their penis as the sign of a covenant? As far as I know, Abraham’s the only person to receive this odd demand.

What I find so funny about the circumcision episode is that God really talks up the covenant before he gets around to mentioning the penis cutting part of it. Just look at what he tells Abraham:

He proposes to give Abraham huge tracts of land, and a whole race full of children, some of whom become kings. I bet Abraham heard all that stuff and said “Well, sweet deal Yahweh, what do I have to do?”

Then God replied, “This is my covenant with you and your descendants after you, the covenant you are to keep: Every male among you shall be circumcised.”

And Abraham, quite confused, responded, “What’s circumcision? I don’t know that word, and I thought I knew all the words invented so far.”

To which the Lord stated “I, the Lord your God, have just coined it. Circumcision means that you will use your dull, rock-bladed knife to hack the floppy skin off the tip of your penis. You are to undergo circumcision, and it will be the sign of the covenant between me and you.”

To which Abraham proclaimed “I’m being Punk’d aren’t I? Where’s Ashton?”

Okay, so I made that last bit up, but I’m sure it went something like that. Regardless, Abraham is a faithful man because he performed self-mutilation on his most private of privates in order to prove his servitude to his god.

Would you do something like that? What if you heard an otherworldly voice tell you to cement your butt shut or to cut off a pinky toe, and after you did so you’d become the “chosen one?” I know I wouldn’t”¦well, maybe if I’d been drinking, but I wouldn’t like it one little bit.

One thought on “An Act of Faith”