This Movie Was So Money

We took in a matinee today and saw “The Break-Up,” and as I’ve said before, I do love me a matinee in the summertime. There’s just something about escaping from the hateful Texas sun into a dark, cool room, and allowing yourself a respite from the mundane for an hour and twenty.

Normally I wait until after we see a movie to read reviews, and after the movie today I felt genuinely surprised by what I read. I had to check the headlines just to make sure I’d seen the same movie as the reviewers. Many simply thought it was mediocre, and quite a few thought it was downright dreadful.

Maybe they went in expecting the Vince Vaughn character from “Old School” or “Wedding Crashers:” the smarmy smart-ass with a libido the size of Asia and an answer for everything. That guy’s not in this movie.

Instead we get a Vince Vaughn much closer to the one in “Swingers.” Just like “Trent” from “Swingers” Vince’s “Gary” comes across as cock-sure and slightly arrogant, but in a way which suggests that just underneath the quips and wisecracks hides a vulnerable and scared man. Gary just seems like a more grown-up and slightly more restrained version of Trent, and that’s not necessarily a bad thing. I know guys that act like those two characters, which makes watching them endure hardships or moments of emotional turmoil particularly hard. 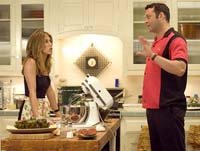 I also found moments of “The Break-Up” difficult to watch; in particular several of the arguments between Gary and Aniston’s Brook. I’ve had those same arguments and felt the same exasperation and anger that those two convey, and maybe that’s why so many reviewers responded negatively to the film. There’s something slightly voyeuristic about watching Vaughn and Aniston fight, particularly since for the most part the dialogue remains grounded in reality.The film chooses to slightly exaggerate the tumultuousness and uncertainty of break-ups, and I can see how some people might find the cringe-factor of that off-putting. We’ve all went through a break-up, and I feel sure that more than a few of us went through one even more nasty than the one portrayed in the film.

The only thing I disliked was how little screen-time Jon Favreau shared with Vince Vaughn. If those two only appeared in films with one another from here on out I’d be a happy guy. They’ve got the intimate rapport and the energetic banter that only best friends share. Just watch them in this clip from “Swingers.” (FYI- A scene almost identical to this one appears in “The Break-Up” between Vaughn and Cole Hauser)

Seriously, if you’ve never seen “Swingers” or “Made” you should turn off the computer immediately and run to the nearest videostore. You’ll see Jon Favreau and Vince Vaughn at their hitherto best. Then go see “The Break-Up.” I feel sure you won’t be disappointed.