Broadcast and Cable recently published a report conducted by the Kaiser Family Foundation which claims that since 1998 sex scenes in television shows have more than doubled. That’s 5 sex scenes an hour. Yahoo has also picked up the story.

After I shook the image out of my mind of The Donald and Martha Stewart rolling around naked on piles of Quiche and hundred dollar bills, I proceeded to finish the article and found out the criteria for “sex scene” included “[scenes] in which people talk about kissing or are simply flirting, a woman licking her lips seductively,” and “talking about it [sex], kissing and fondling, and intercourse when those are the emphasis of a scene.”

No wonder the numbers are so inflated. Under their criteria Burger King broadcasts commercials which count as “sex scenes.” 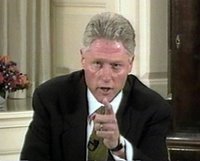 Now I understand why we’re on the precipice of a philosophical civil war in the United States: Everyone’s all pent up because no one knows what sex is anymore. We sure as hell understand violence, but sex? Talking about sex counts as a sex scene? Give me a break. Then I guess according to Broadcast and Cable the United States people watched President Clinton engage in a sex scene when he explained how oral doesn’t really count as sex.

Man”¦I sure miss ”˜Ole Tubby. Give me a good old, wholesome sex scandal over intelligence leaks, torture, and massive war any day.