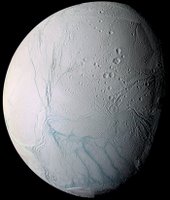 Today NASA released an article revealing evidence which suggests the existence of liquid water on Enceladus, a moon of Saturn. Scientists hypothesize that water exists perhaps tens of meters below the surface of the moon. Speaking about the discovery Dr. Carolyn Porco states, “if we are right, we have significantly broadened the diversity of solar system environments where we might possibly have conditions suitable for living organisms.” 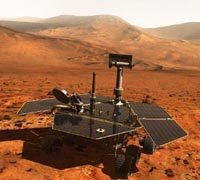 Excuse me if I’m not jumping up and down. I followed that silly Mars rover obsessively several years ago just knowing it would stumble upon great riverbeds, and all it found was a buncha red rocks. I remember something about Europa supposedly containing water as well, but that turned out to be bunk too. Every time I get excited about an announcement from NASA or JPL I’m seriously disappointed.

And even if they do find water what will that mean for us? Shit, NASA can’t even design a craft with enough structural integrity to keep Styrofoam from flinging off at launch, so what makes us think we could mount a mission to the moon of Saturn? Okay, assuming the geniuses at NASA possess the intelligence and acumen to correctly calculate the trajectory and landing of a rover in either metric or standard measurements so that it actually lands safely, we could conceivable collect data and perform experiments on the surface of Enceladus.

Then what? We find that life (microorganisms if we’re lucky) may have existed there billions of years ago? We add more proof to the theory of the Big Bang, evolution, and the expansion of the universe thereby giving fundamentalists yet more science to ignore? Yay. Hooray for us. 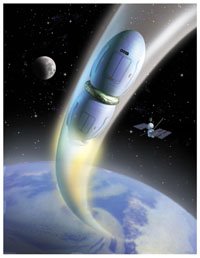 You know what? As far as I’m concerned unless NASA suddenly develops a space-elevator, discovers how to open and navigate an Einstein-Rosen bridge, develops crafts with hyperdrives or Dilithium crystals, or successfully slingshots around the sun I’m not all that interested in their little exploits.

People in the sixties and seventies experienced an exciting time as far as space exploration; I get some rocks and a rumor of water. Be still my beating heart.