I oftentimes think that our culture has taken a wrong turn as far as child-rearing goes. Epistemologically, our culture seems to think that children need constant attention and protection. As George Carlin so famously stated in his “You Are All Diseased” concert, we make children wear helmets for everything except jerking off.

I think I should validate my credentials and expertise before stating my hermeneutics of child-rearing. I have no children, and I don’t plan to have any in the near future which makes me a perfect candidate to criticize the parenting of others, because I don’t have any emotional investment in a child clouding my judgment.

It goes without saying that too many parents view their children as little objects of worship, instead of impressionable and growing minds which need structure and encouraging discipline.

Some parents want their children to view them as their friend so much that they severely lack in the discipline department. And still others seem to think the cuteness factor of their child exempts them from having to act civilly in public. I don’t care how darling you think your kid’s dimples; make him stop screaming while we’re standing in line at HEB or I’m dropping my milk on his head. 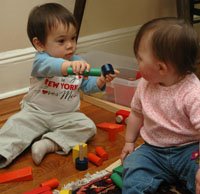 Also, parents need to quit making such a big deal out of making their children share. I’m sure you’ve heard a parent telling their whining kid to “share your toys,” or “take turns” and then forcing them to let a sibling or a relative play with their most valued possession.

Why do they do this? Adults don’t share; that”˜s not a trait they’ll use later in life. In fact, as we get older we all become more and more possessive. We fence up our yards; we cross the street to avoid panhandlers; we dodge the neighbor who constantly wants to borrow our garden equipment; we even get caller ID so we have the luxury of seeing who we willingly share our time with. Even when a relative who we love borrows something we constantly worry about our property and want it back as soon as possible. As far as I’m concerned stinginess is a virtue. 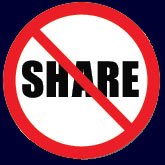 So don’t make your kids share. Let’em hoard their toys in their room and fight their siblings about sharing. You’ll better prepare them for adulthood.